Martha Rae Baker is an action painter or Abstract Expressionist 2.0, in the lineage of the fraternity formed in New York after WWII which included now iconic artists like Pollack, deKooning, Kline and Still. However, the old boy’s club tended to create from macho pathos. Baker makes her distinctive marks from a place of pure joy, working as she does from a light-filled studio in the footprint of the Sangre de Cristo Mountains of Santa Fe New Mexico, drawing inspiration from nature, poetry, and music.

In contrast, Kathryn Vinson Tatum is a painter of action, capturing the the Rockies of Telluride and Taos, her two homes, in paintings that celebrate the emotional impact of being on top of the world above tree line. In short, “off-piste” describes Tatum both as an artist and as a skier who regularly enjoys shooting the moon. 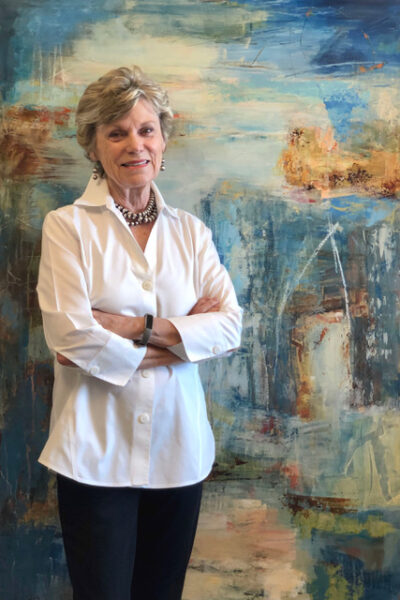 Martha Rae Baker works primarily in encaustic (melted beeswax fused with heat), but also in oil/cold wax and acrylic such as in the images on display at Slate Gray. Those meditative, thought-provoking, mixed-media paintings are characterized by a textural surface enlivened by incised lines, the addition of marks, and the scraping back of the ground to enhance the depth of the work. 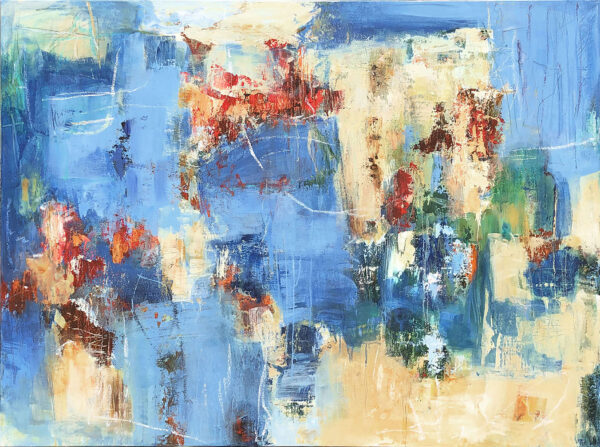 Baker begins her paintings by intuitively drawing with various marking tools such as charcoal, oil pastel, china marker or fluid paint. She then continues in a playful state, free from judgement and hesitation as long as possible, affording the work a life of its own in which each and every brushstroke, line and layer informs the next as in a jazz improv.

Born in Corsicana, Texas, Baker earned a Bachelor of Arts from the University of California at Santa Barbara, then returned to Texas where she studied art at the University of Dallas and drawing and printmaking at Collin College in Plano. The artist also traveled abroad to Greece, Italy, Russia, France, Germany, the Czech Republic, France and Spain to further open her mind and train her eye.

A founding member of Gallery VII in Plano where she lived for over 20 years, Baker and her husband relocated to New Mexico in 2006. 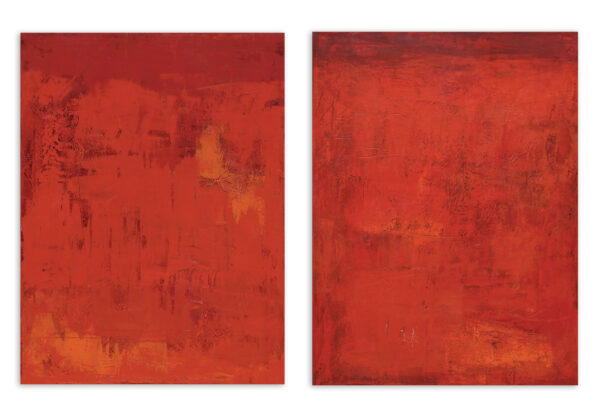 Southwest Art, “Women in the Arts” and Watercolor have celebrated Baker’s work. The May 2016 issue of Art and Antiques featured her oil/cold wax paintings. And, as a signature member of the Southwestern Watercolor Society and the Mississippi Watercolor Society, Baker’s highly collected paintings have been chosen over the years for inclusion in numerous national and international invitational exhibitions. 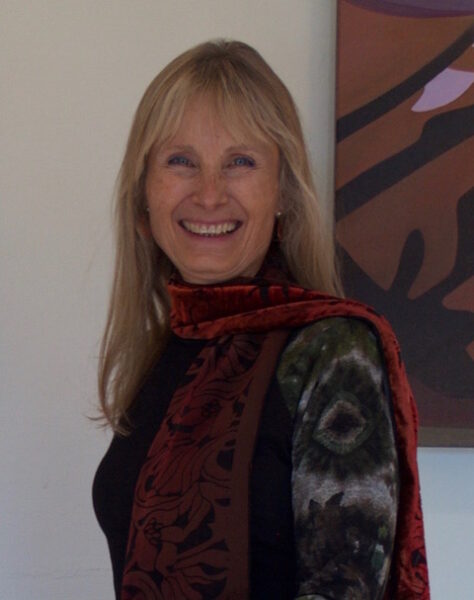 “For the first 10 years of my life we lived without neighbors or kids in our community. If my best friend, my brother, and I weren’t up to something adventurous, I was busy drawing and painting in the screened in, year-round, porch my parents made into an art studio for me. My grandmother on my mother’s side was extremely creative and introduced me to some basic drawing and painting techniques. We also created the most beautiful, intricate, Polish Easter Eggs designs; you know the ones with the fine line designs. There was a time my parents allowed me to draw on my bedroom walls –  considering they couldn’t stop me.”

And no one could stop Tatum from diving headfirst into skiing adventures either:

“My parents jumped at the opportunity to involve us in the sport of skiing. My brother and I developed a love for skiing and joined The Great Gorge Ski Racing Program. Ultimately ski racing became the vehicle that enabled me to compete and travel to many US, Canadian and European ski areas and mountain resorts.”

While still in high school, a mentor helped Tatum enroll in New York City’s prestigious Art Students League where she learned “the formula to becoming a successful artist requires a concentrated dedication to learning the theories and techniques of drawing, painting and color, while also having the passion to visually explore the subject matter that interests you.”

After graduating high school, Tatum attended the Art Institute of Boston where she studied graphic design and Illustration with the goal of becoming a commercial graphics designer in the music industry. Following a move from Boston to New York the artist wound up working for A&M records designing all its promotional and advertising materials. As a freelance graphic designer, she also worked for WNYC public radio. 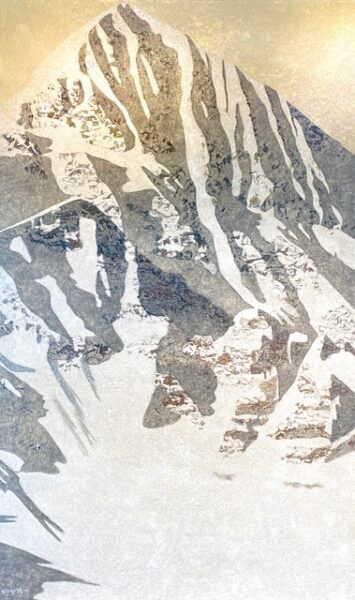 The move to Telluride came as a result of Tatum’s work for Top Notch Resort and Spa, the team that designed the Spa at The Peaks in Mountain Village, Telluride.

“I applied for and became the restaurant manager for The Peaks Hotel’s Alpine Glo in 1992. Awestruck by the natural beauty of Telluride and the San Juan Mountains, I once again set up my easel and put paint to canvas. Knowing I could not stop celebrating the Telluride’s grand landscape, I started Lyceum Arts Gallery, 430 West Colorado Avenue, my studio gallery for 12 years!” 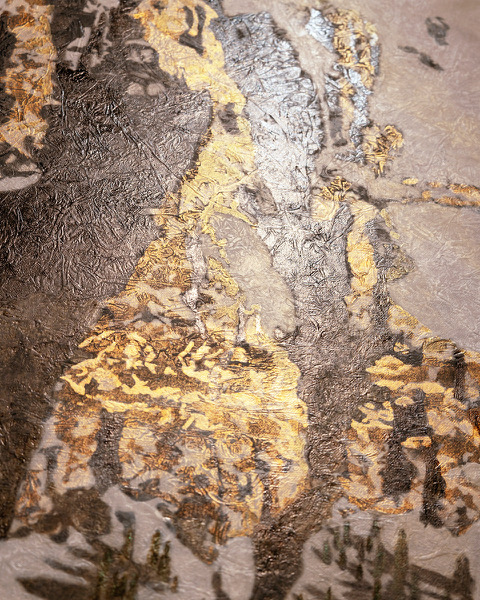 In 2006, Tatum and her husband began spending six months a year at their ranch in Taos. In 2011, they moved to the town of Ranchos De Taos to be closer to the highly established Taos art scene.

“That was where my painting techniques developed into a synthesis of Chinese processes and philosophies and Western art techniques and materials. By combining rice paper, charcoal, Chinese ink and brush techniques with acrylic paints and wax, my mixed-media synthesis finally reached its fullest expression.” 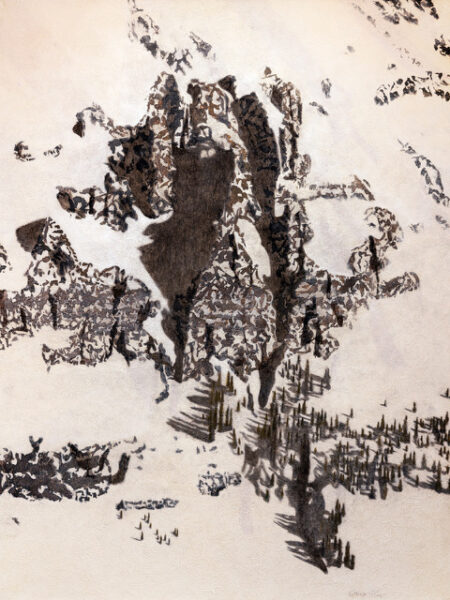 Humbled by the extreme above-tree-lined landscapes surrounding the Telluride ski area, Tatum never really knew how to capture its respectable beauty until recently.

“By applying the aforementioned mixed-media approach to painting and combining the masculine strong rock faces of the lofty scene with the feminine quality soft white snow, I discovered the yin and yang of my work. If you look at these geometric interpretations of my favorite terrain standing slightly to the side of the paintings, you might see a black-and-white piece of art. However, viewed straight on, you might see the rocks sparkling with golden light or a bronze twinkle, which reminds me of the times clouds cover the sun and the landscape appear monochromatic. But when the clouds move and the sun is uncovered you see the colors sparkle and feel the heat. That is what I hope may work arouses in the viewer: a unique experience depending upon the light and time of the day. There are other hidden treasures I encourage everyone to discover for themselves, the variegated beauty of the mountains I am privileged to call home. The place where my twin passions, painting and skiing, come together.”