Slate Grate North is hosting a group show, highlights of the combined stables (since the acquisition of the Telluride Gallery’s lease). Go here for more on that show.

Go here for more about Ment(or/ee) at Slate Gray. 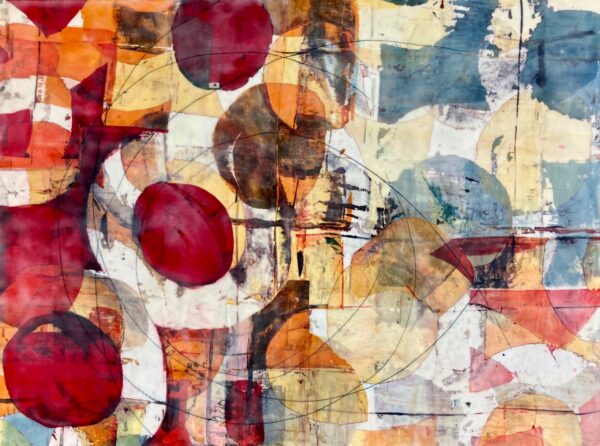 Shades of modernists Milton Avery and Arthur Dove, Judy Kohin fills her new body of mixed-media work, these quiet but juicy canvases, with flattened planes, a mix of bright and muted colors, and pared-back compositions that capture close up and personal details of the majestic landscapes that surround her home, her playground. Those ever-changing views, that changing light, clearly sets her imagination on fire.

Titled “Re-Wired,” Judy’s show at Slate Gray South is an homage to abstraction, but also looks over its shoulder at the tradition of Western landscapes of the 19th century (and onward). Collectively Judy’s work evokes the the natural world with spontaneity and honesty that underlines the notion of bucolic escape, both grand and serene. The work, in effect, liberates forms from trees, rivers, rocks, plants, birds, sky, wind and sun with a richness in the variety of shapes that informs and inspires the artist and lover of all things outdoors. Though she conceals or blurs the descriptive qualities of aforementioned “muses,” the tour de force that defines this collection lies in Judy’s ability to retain and capture the energy that animates them all.

“I am most at home when I am outside, completely immersed in the wildness of the world. I want my work to convey the exuberance and vitality that I feel—alive! The natural world is a source of joy and ecstasy—I am in awe of its beauty, power and resilience.

“I love combining media to create these paintings, and I love the different processes that this body of work requires. Making art sustains and excites me—still—as I experiment with composition, color, line and feeling. This is such an uplifting and completely engaging practice… it takes my full attention and focus, and I am truly grateful for this time.” 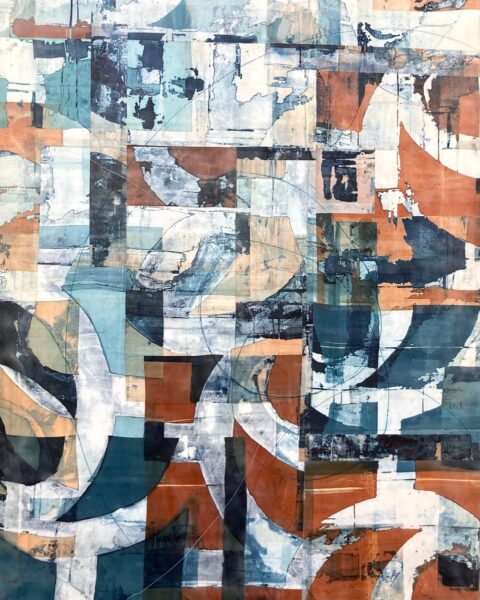 Judy’s new body of work is as complex, compelling, and appealing as their maker, whom I first interviewed in 1993 as a freshman journalist on Telluride’s brand new (and first) daily paper. The following is what I wrote (28 years ago) about the artist, whose name used to twin with the Ah Haa School for the Arts, where she has worked as director from the get-go:

“Throw the adjective ‘Renaissance’ at Telluride’s population and it sticks – and Judy Kohin is the paradigm: artist, actor, cartoonist (her Telluride Valley Cows became a fixture in the paper and morphed into a book); administrator; and accomplished athlete. I’ve also heard her sing doo- wop. With all those disparate talentss wrapped up in a dancer-jock body (yes, that too), she’s surprisingly reserved and quite modest.” 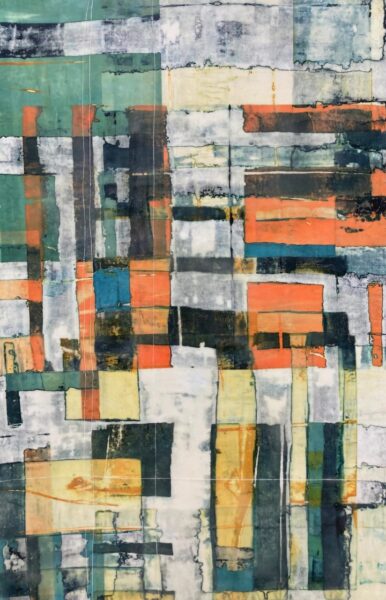 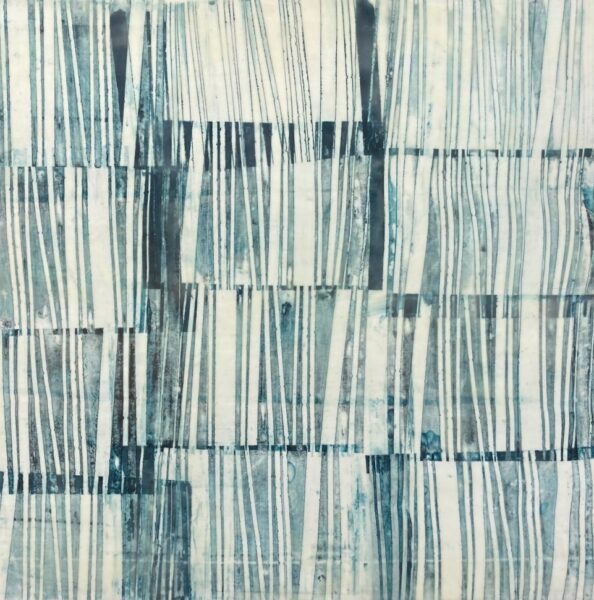 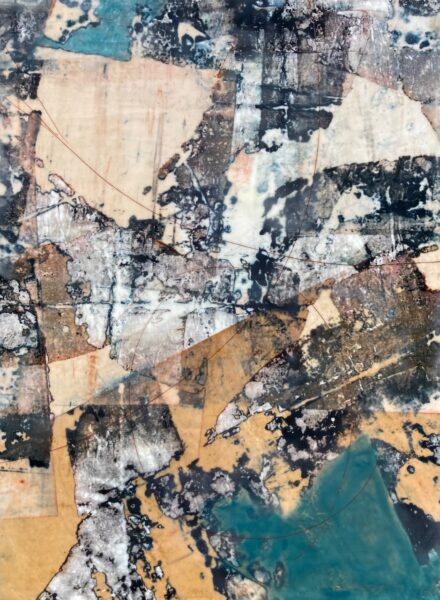 Some things never change: creativity, smarts, muscle and moxie live happily-ever-happy in the person – and those attributes show up in her art.

Although Judy began to explore mixed-media in the late 1990s during a residency at the Vermont Studio Center, the more immediate catalyst for “Re-Wired” was a class at Ah Haa led by fabric artist Kathy Green about deconstructing silk-screen printing. Judy’s demanding process now begins with hand-dying fabrics. The enhanced material is then glued onto a panel, which is brought to vibrant life with paint, drawing and encaustic wax, then framed by the artist, so sealed, signed and delivered.

“Art making is one of the most uplifting things I do. I love it and I hope these new paintings convey that feeling.”

Judith Kohin studied painting and printmaking at Bates College, where she received a BA in Studio Art, before heading West and settling in Telluride in the mid-80s with her friend Barclay Smith Daranyi to cook at the dearly departed Skyline Guest Ranch.

After brief, but exciting careers in Nordic skiing and mountain-bike racing, the Ah Haa School opened in 1991 and Judy was hired as director soon afterward. She held that position until 2021– with some time away from 2006 – 2012 – when Ah Haa completed a monumental expansion after designing and building a 10,000 sq. foot facility in the heart of Telluride. With the future of Ah Haa secure, and following a long career of encouraging, promoting and supporting artists, Judy felt the time was right to embark on a new chapter and delve into her own creative work. She is thrilled to finally be able to pursue art-making full time.

In addition to working in a variety of visual media throughout her career, other creative projects have included a self-published collection (in 2005)  of 20 years of her weekly cartoon, “The Valley Cows”; numerous performances with “Heartbeat,” an a cappella group she has been singing with since 1994; camera and producer credits for two full-length documentary films, “Bag It” and “Uranium Drive-In,” with filmmaker Suzan Beraza; and wearable art outfits over 20 years for the Telluride AIDS Benefit Fashion Show, including a line of body painted clothing.

When not working or in her studio, today Judy Kohin spends time guiding people into the wilderness with her husband through their business Wild Hare Snowshoe and Hiking Tours. In her free time she is in the great outdoors—biking, hiking, skiing or floating down a river.