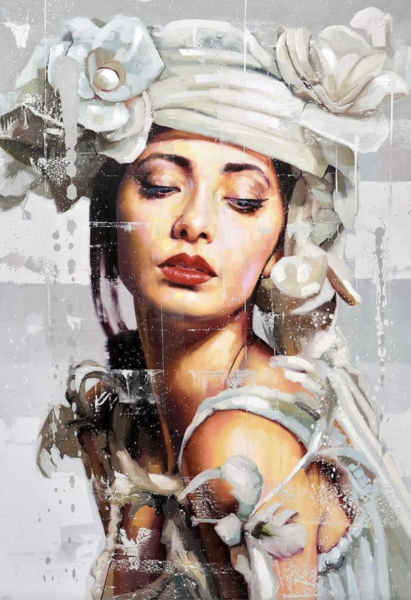 His artist’s statement is a wink and a nod to one of Shakespeare’s most quoted lines: “All the world’s a stage,/ And all the men and women merely players,” (from “As You Like It,” Act-II, Scene-VII).

“The world is a huge stage where the actors are free, but only free to play a role, just free inside the enclosure,” adding, “They are able to move only in a specific area established by a creator, in this case, me. All my recent work is about theatre and opera; all my models are characters. My idea is to exercise (or exorcise) a thought with instinctive and quick brushstrokes as if it were a poetic act. In order to be freer and more gestural, I only use large canvases. What interests me most, is telling a story,” explains artist Silvio Porzionato, whose work is featured at Slate Gray Gallery for month of February. 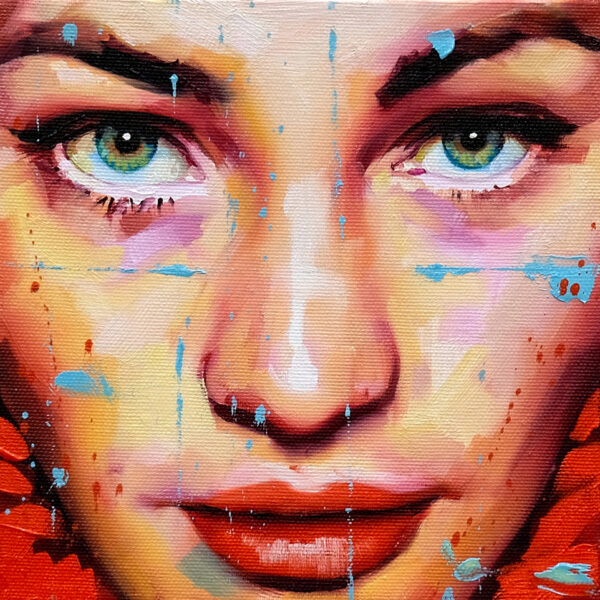 That said, the Bard’s message is unapologetically dark, reducing the lives of humans to a performance at the end of which we all wind up as we began, helpless. Silvio’s work, on the other hand, is light, redolent of joy, his images inspired by friends and acquaintances whom he renders immortal, frozen in a space defined by a canvas as stage.

“I often work with the same models. I try to create iconic and theatrical figures. They are daughter figures of theater and opera or simply characters. My goal is to transform ‘model and friend’ into ‘actress on my stage.’”

“Curtains” in the form of blobs and blotches of aquamarine, blues, red and peach in the foreground at once reveal and conceal his cast of characters, underlining Silvio’s theatrical intent for this big, bold, beautiful body of work. 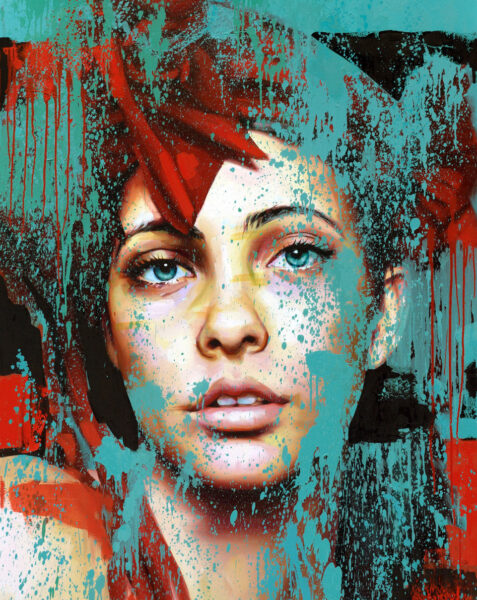 Silvio draws further inspiration from other mark-makers past and present:

“My muses are also other artists as is for those who start playing sports or for those who act, or those who play or sing, I let myself be influenced by past or present creatives who aroused strong emotions in me. The first of all, during high school, was Michelangelo Buonarroti. He has always been my true muse. I also liked his personal story and like him, when I was young I broke my nose with a fist – the truth is that I broke my cheekbone– and it made me feel good to think that it had happened to him too. I also love Gustav Klimt, Emilio Vedova, Lucian Freud and Jenny Saville. They actively influence everything I paint. If I’m depressed, I open a random catalog of these artists and 10 minutes later I’m in the studio full of energy.” 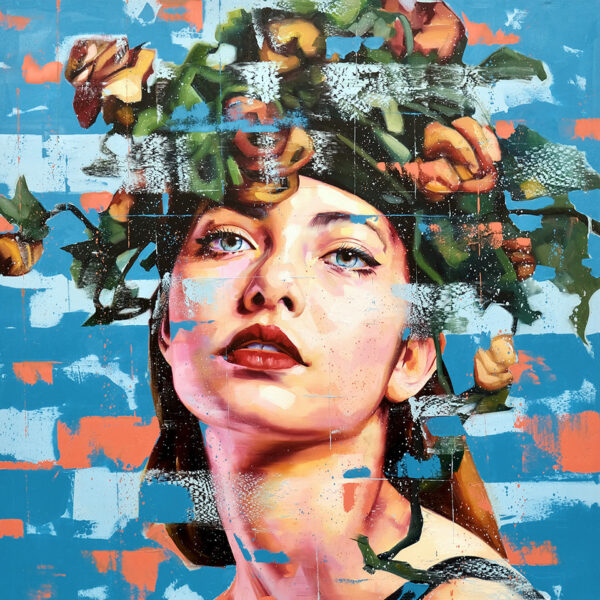 Silvio’s process starts with a photo:

“I take a series of shots in a photo studio, so I can control the lights and shadows. Once I have chosen the image I want to paint, I draw a trace of it onto the canvas…To keep the figure as real as possible, I try to give light to the eyes which brings them to life…”’ 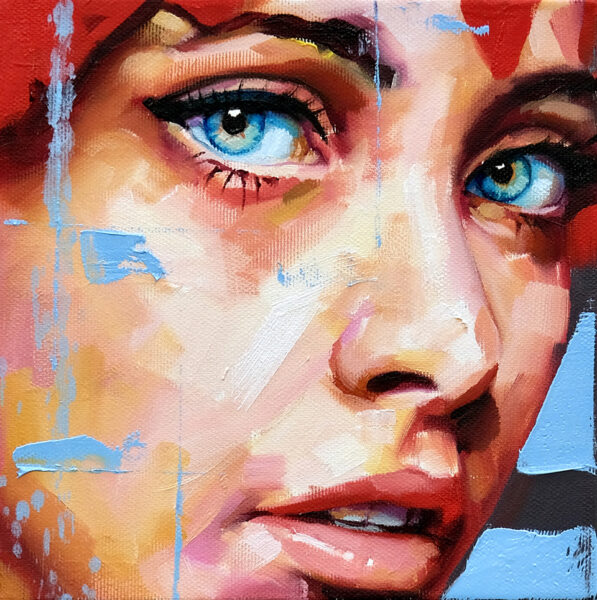 His medium is oil:

“For a while I painted with acrylics, but when I went back to painting with oil it was like love at first sight. The colors are brighter and more intense. The brushstrokes flow on to the canvas in a totally different way from any other technique. Oil for me is magical.” 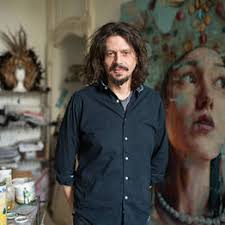 Silvio Porzionato was born in Moncalieri, Italy in 1971.

“My family was very simple and of worker/peasant origin. No one was an artist. We never imagined becoming part of an ‘intellectual’ world. I grew up with the belief that I had to wear a jacket and tie to be successful. Over the years, I did manage to wear that jacket and tie, but was never satisfied. I was always looking for another way.”

It all began on the streets of Calcutta when Silvio was age 32. He reports that one day a very old Indian painter looked him in the eye and said, “You are a painter.” At the time, he had never touched a brush. But Silvio started making marks on canvas that very day.

“On that trip to India, I realized that in order to be happy, I had to first understand who I really was. What my real talent was. And my only real talent was drawing. It was always the only thing that felt really good to me. On the border with Nepal, they gave me watercolors. During the remainder of the trip, I was constantly drawing and painting with my new tools. On my return to Italy, I decided that making art would become my life and, soon after, that is what happened.”

After Silvio graduated art school, he became the head designer for an important Italian company. After a decade, upon his return from India, he decided to start a new life in the silence of the countryside, living and working close to nature – to discover the nature of art. 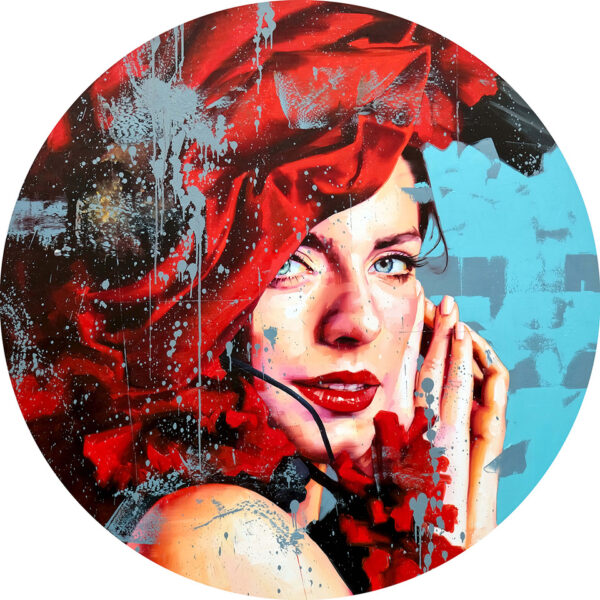 Silvio began exhibiting his art in 2007, that same year he was selected to exhibit at the Arte Mandadori in Italy. Then more tributes followed:

“I am grateful for too many things to pick one stand-out honor, but perhaps the earliest hits are the most memorable. Having participated in the Venice Biennale. Having made an exhibition with 112 paintings for the Sicilian Contemporary Art Museum. But all the exhibitions around the world, including this one in Telluride, are equally strong satisfactions for someone who came from a small village in Italy who followed his heart.”

Silvio Porzionato paintings are held in private collections, galleries and museums worldwide. In Italy alone, from Parma to Milan, Bologna, Parma and Rome. 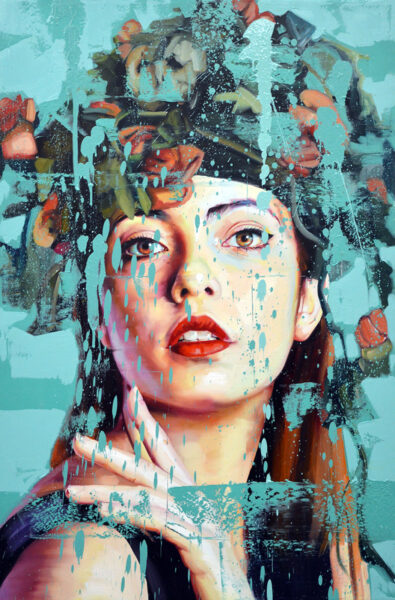 “In the end my art is part of a type of new contemporary figuration, usually on a large scale, which combines classical and mannerist figuration with expressionist painting.”