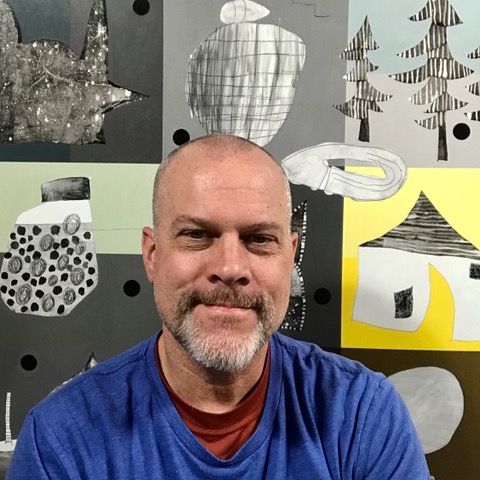 Tommy White, in front of his painting titled “Stories from the Church Basement.”

Painter Tommy White’s will to form appears as a psychic flow from brain or gut (second brain) to surface. In that way his work is similar to Art Brut, although Art Brut or Outsider Art, generally refers to a range of naïve works made outside the academic tradition of fine art, generally by untrained, (often clinically insane) artists

In contrast White, a former college professor turned full-time artist, is highly trained. (And to the best of our knowledge, perfectly sane.)

“At Michigan State I studied engineering, advertising, and psychology before settling on art as a major. Though I found interest in each area of study, the art faculty never persuaded me to stay within the parameters of the discipline … In fact, quite the opposite. After studying interactive color (Albers and Itten), I was hooked! All I wanted to do was paint! Further, in my professional career, I’ve been able to meet and work with Peter Halley and Julian Stanczak. Those two colorist, along with many others, have provoked and driven my curiosity in the field of painting.”

White’s seemingly naive work, his psychically charged images, however, are all about connecting free-flowing dots:

“My images generally come from exercises in pareidolia or seeing shapes and forms while looking at clouds; the game Pictionary or incomplete drawings that still function to convey information; and children’s drawings, my own or those randomly found in public libraries, etc. That being said, when I begin a painting, I usually start with very loose and suggestive drawings, then I tend to subtract information to encourage a viewer to make whatever associations he or she is inspired to make.”

Gallery director Bekah Kolbe titled White’s show at Slate Gray Telluride “Affiliated Works” because his five paintings are not from a particular body of work, nor do the images share a single focus.

That said, two are related conceptually: “Blue Mesa” and “Mangrove.” They reflect White’s responses to the energy of the night:

“How the ambiance and/or mood of a night sky impacts specific places and individual moments.” 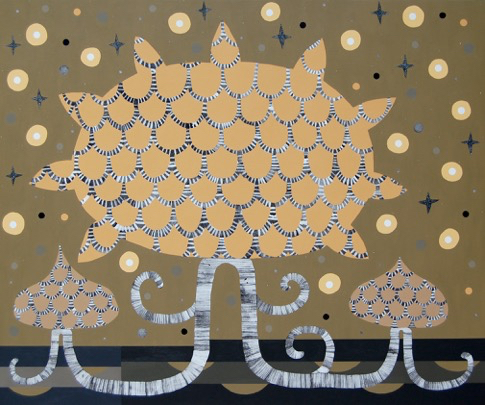 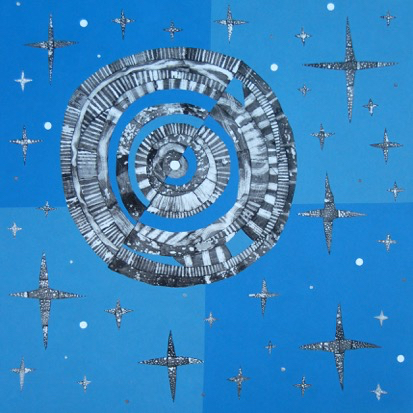 In the Dean Koontz novel, “The City,” the writer describes how a felt hammer is used to hit wires inside a piano to create sound – hard meets soft:

“Reading the book, I was particularly interested in the yin and yang of the mechanics: the power of the tool in contrast to the gentleness of the felt.”

On a trip to deliver some paintings, White listened to an audiobook titled “Night Visions: The Secret Design of Moths.”

The artist then connected what to anyone else would feel like disparate dots: A felt hammer hitting a piano key makes a pinging sound. On a quiet night drinking beer on a porch in West Virginia when a delicate moth hit the hard surface of an old incandescent light bulb, White also heard PING!

The two “pings” came together in White’s image of a moth, a hybrid of impressions from both stories. 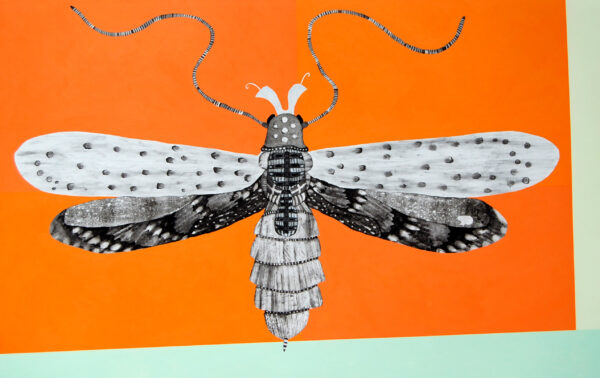 The painting titled “Concubine” refers both to the literal meaning of the word itself, and also to a painting made by a former colleague:

“Dan Tranberg was a dear friend and fantastic artist who passed away about four years not long after we worked together. The palette of the painting is a tribute to Dan’s images.” 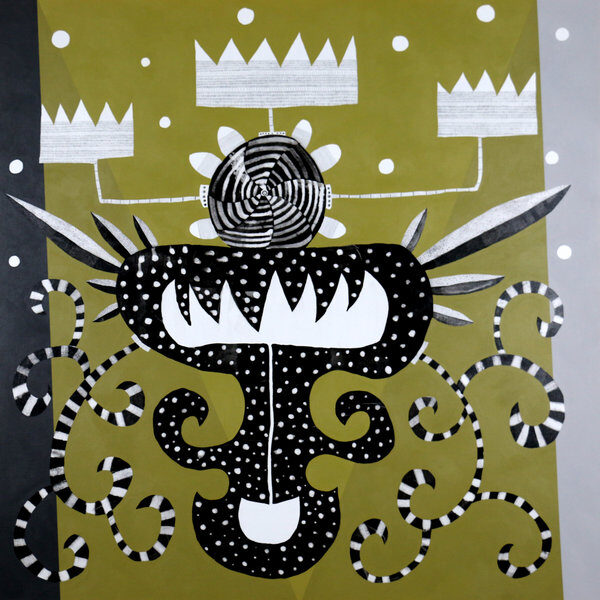 White’s most recent painting in Slate Gray show is “Stories from the Church Basement.” 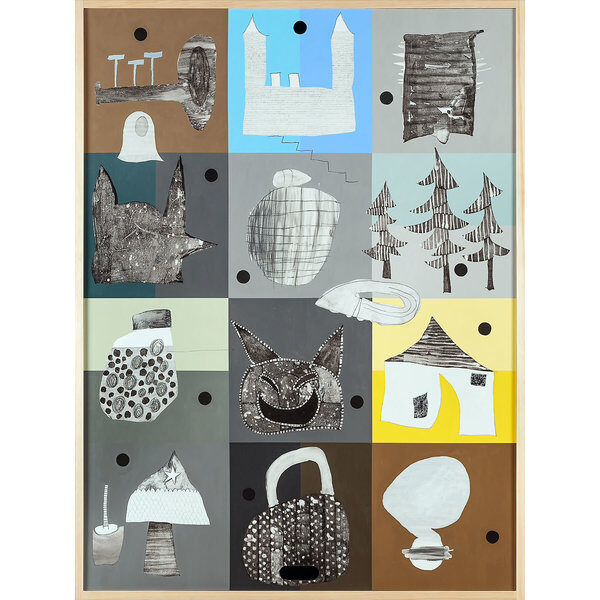 “This work invites the viewer to insert a marble into a hole at the top and listen as it descends through acoustic chambers within the piece. The imagery, sound, and title should collectively inspire my audience to construct his or her own narrative(s), a goal for my patrons in general.”

Excluding “Stories from the Church Basement,” White asks the his viewers notice how the other four paintings in the exhibition are not symmetrical, nor are their backgrounds level:

“Think of a Cezanne still-life and how his objects sit on a tabletop. The table isn’t level … It is unbalanced, seemingly tipping off the picture plane. Yet, most viewers will pay no attention to that fact. The environment created within a Cezanne is, for the most part, ‘un-noticable.’ However, it still has a major bearing on the viewer’s perception of the work. Off-kilter is right on.”

According to the Detroit Institute of Art (DIA):

“In 1932, Mexican muralist Diego Rivera (1886-1957) began illustrating the walls of what was then the ’s Garden Court. Using a fresco technique common in ancient Egypt, Greece, Rome, and the Americas, Rivera created a grand and complex cycle of murals that portray the geological, technological, and human history of Detroit. He also developed an ancient context for modern industry rooted in the belief system of the Aztec people of central Mexico.”

The post-WW11 boom in the US economy popularized an American ideal of the middle-class lifestyle or the American Dream, where conspicuous consumption promised happiness and social status. Though many women were frustrated by expectations to conform to socially constructed gender roles, a variation on the theme of keeping her pregnant and down on the farm.

French artist and social critic Marisol Escobar’s “The Cocktail” depicts a local gathering – with the emphasis on the sense of disconnect and isolation from the fun and games the “Boys Club” was enjoying throughout the decade. (Father Knows Best?)

Welcome to the world of a young Tommy White who, as a boy, had a bent for drawing and painting, solitude and isolation. His first grade field trip to the DIA where the above two works were on display proved to be a seminal moment in the artist’s early life.

“Those works left a big impression on me. Growing-up, I colored and made drawings just about everyday through my elementary and middle school years. And, in high school, I took art classes and mechanical drawing classes. I thought I wanted to be an architect, but working for an architect before college changed my mind.”

And now White’s images at Telluride’s Slate Gray Gallery might very well change your mind too.

“If the viewer is really fully engages with my paintings, she/he will notice the subtleties and abnormalities inherent in the paintings and make new and original connections after leaving the gallery. They too will notice the discriminate and indiscriminate people, place and things that come and go in their world, how they interact and impact them and visa-versa. In general, my intent is to offer just enough visual information to encourage the viewer to take roads less traveled, find new ways to rationalize whatever comes their way.”

A worthwhile diversion in the Age of Corona.