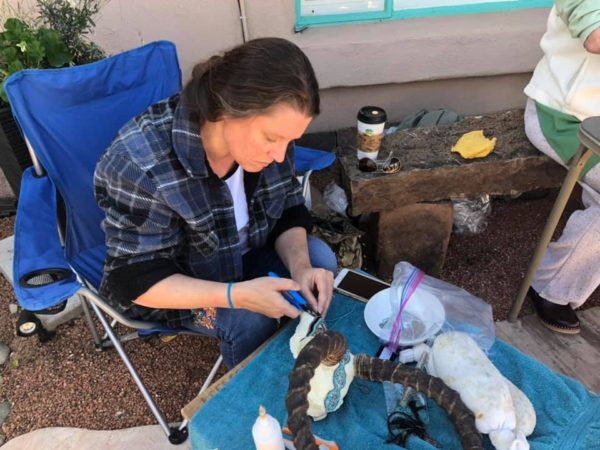 Ali Launer at work in her studio. 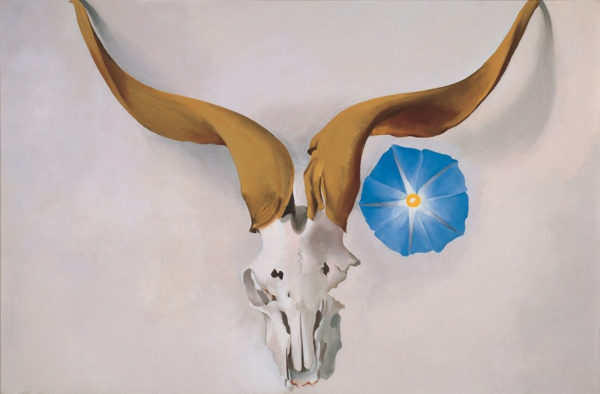 Fast forward about 100 years (from the time Albert Steiglitz discovered O’Keefe in 1916), inspired by O’Keefe, another denizen of New Mexico has also memorializes rams’ heads – and those of other critters like bison, bull, African impala, oryx, and kudu. In a unique spin on taxidermy, the graceful shape of each animal’s head serves as a 3D, shaped canvas that houses the intricate details of Ali Launer’s art. 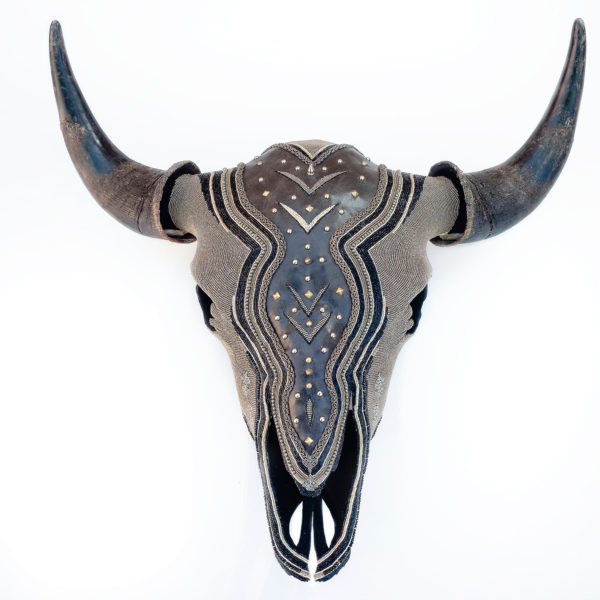 “I am inspired by Georgia O’Keefe and the arid landscape of her Ghost Ranch and of New Mexico in general. I also love the work of Jeff Koons, the bright and shiny and kitschy souvenirs of pop culture he has managed to elevate to high art. But the greatest influence on my work is Mother Nature herself: lizard skins; the colors, textures and shapes of rocks; the bold Southwest sky – and the bones of desert animals. When I was a kid growing up in New York, I spent as much time as I could exploring in the woods.”

However, instead of paint, Launer medium of choice is beads, a striking combination of luxurious precious and semiprecious stones, handmade Bali Sterling silver, and glass seeds, which she uses to create her signature style of art, unique works that captivate and compel a growing number of collectors:

“I fell in Love with Ali’s work the moment I first saw her art at the Slate Gray Gallery on Main Street in Telluride. I bought my first Longhorn as a gift for my husband. That was over two years ago and I’ve since added two more pieces. I cannot get enough of Ali’s creations. She clearly has a great eye for bringing new life to old skulls, pieces that sit at the border of rustic and luxe. I make it my mission to see as many as a I can in person. I know I cannot own them all, but I can – and do – appreciate every single one of Ali’s works. My collection has just begun,” said Shereane Houston. 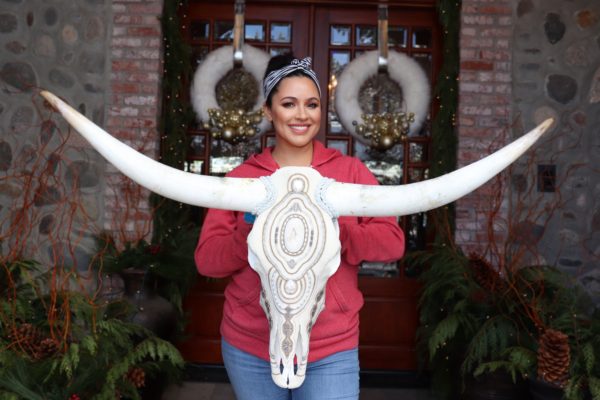 For the record, it takes Launer anywhere from 15 to 80 hours to decorate those horns with her intricate designs. 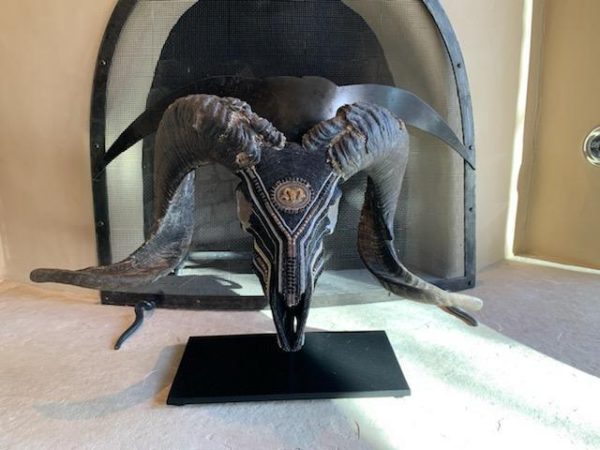 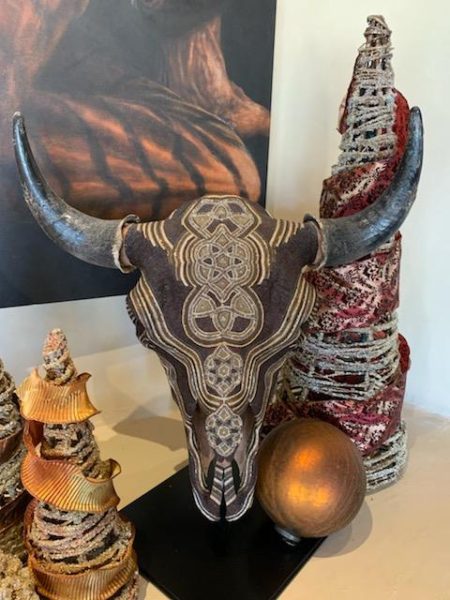 “Ali is a very accomplished bead artist. With its elegant, complex detail, her work far outshines other art in the category. I suspect that is because she generally uses smaller beads than others who employ the same medium. Obviously that means a greater expenditure of time, but Ali also produces finer art,” said another fan and collector, Bernie Ely. “We have three of Ali’s pieces, all prominently displayed in our home, a buffalo skull and two ram skulls, each of which elicits a “WOW” from guests.” 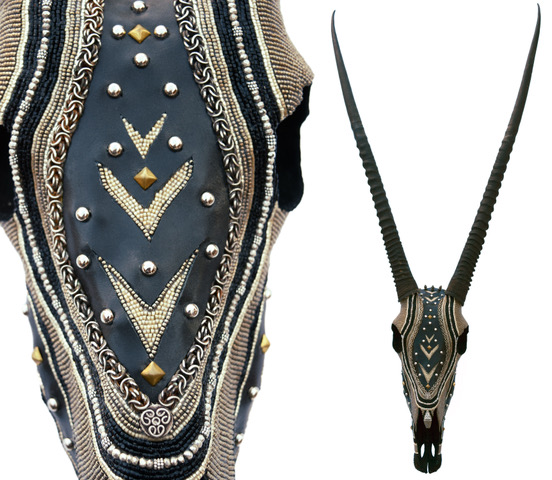 I love the shape of the skulls, which I choose over the flat surface of a painting. The sensual beauty and visceral strength of the clean white curves inspires me,” added Launer.

Launer claims beads called to her, rather than her choosing those tiny orbs:

“I never had the urge to paint, but I have been beading since I was 12. And the beads have always shown me where they want to go. The wide range of their colors and sizes yields seemingly endless possibilities. I use matte and shiny finishes to create depth and contrast. Every row I lay down is carefully thought out and positioned to create a dynamic within the stillness.” 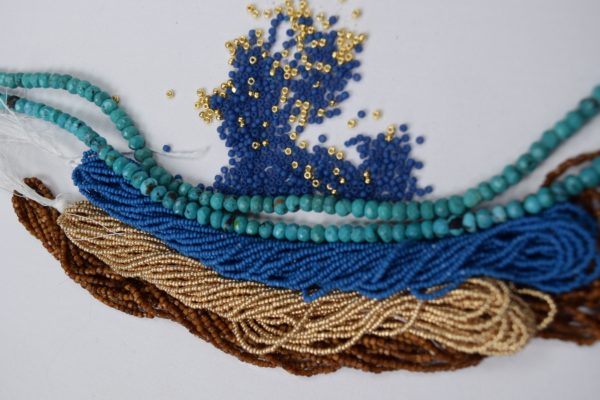 In the beginning – are the beads. 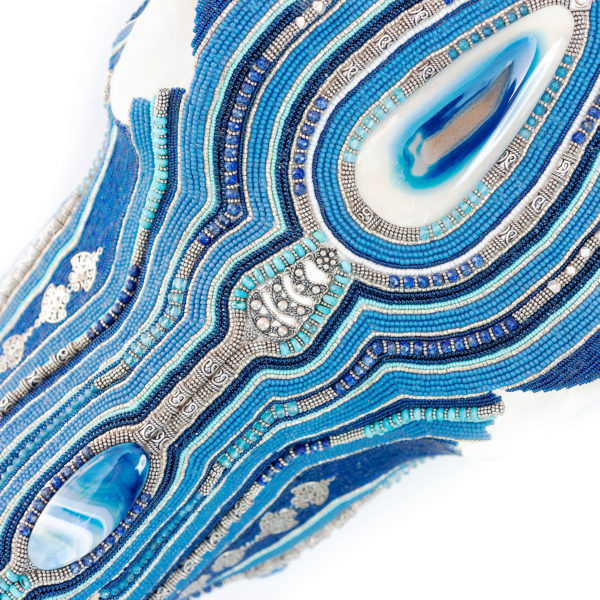 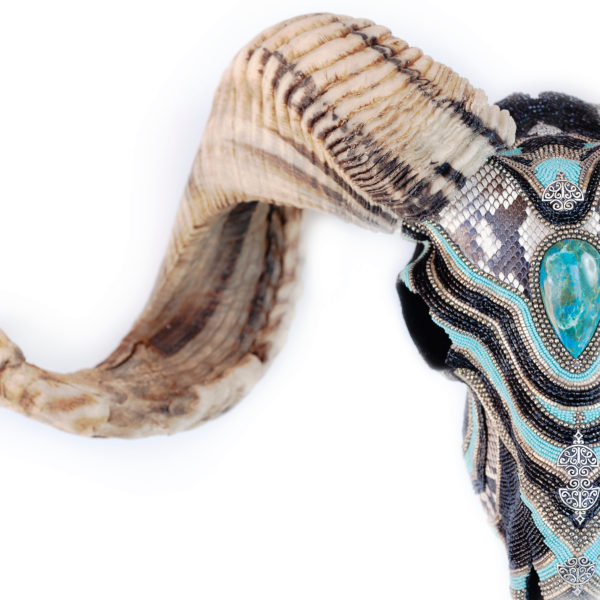 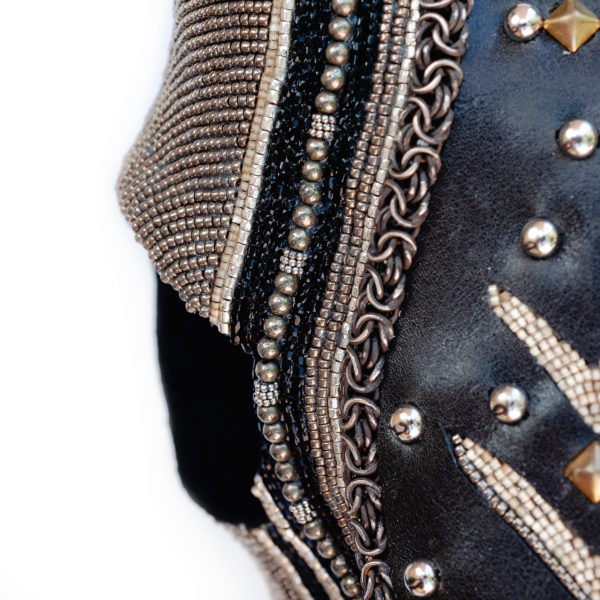 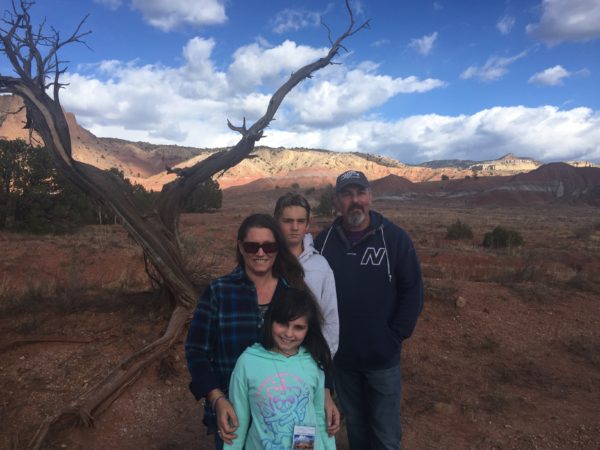 Ali Launer and her family at O’Keefe’s Ghost Ranch.

Ali Launer began working with beads at the age of 12 in her home state of New York. At 17, she relocated to Boston, MA, to attend Newbury College, where she studied interior design. That training and her life in places like the Caribbean Islands and Barbados, inspired an abiding passion for the colors and textures found in her beadwork today.

At 22, Launer headed West to Santa Fe, New Mexico where, in 2001, she began beading skulls. She purchased her first skull at the Santa Fe flea market and started making her art by trial-and-error. Her first effort still hangs proudly in her home studio.

In 2004, Launer married and moved to Corrales, New Mexico, where she currently resides and continues to create dramatic beaded wall art.

In 2006, Launer had a son; in 2009 she gave birth to a baby girl. Both children play – and occasionally fight – along side their mom in her studio. 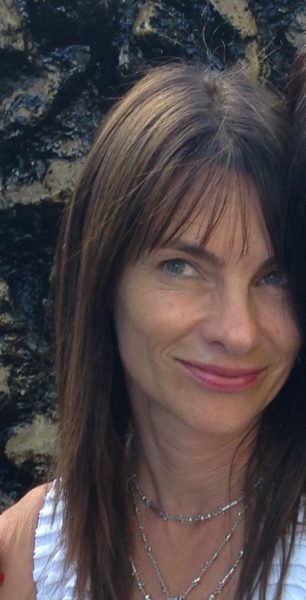 About 35 years ago, Amy Schilling was hiking in the desert just south of Santa Fe, New Mexico, when she stumbled across a piece of Southwestern history in the form of rock art long associated with prehistoric people. Something about the the ancient symbols pecked into stone struck a chord that initially resonated in the form of  jewelry, metal pendants, and earrings.

Later, a trip to northern Italy upped the ante: the artist made sketches that evolved into what is now Schilling’s signature work: striking encaustic paintings. 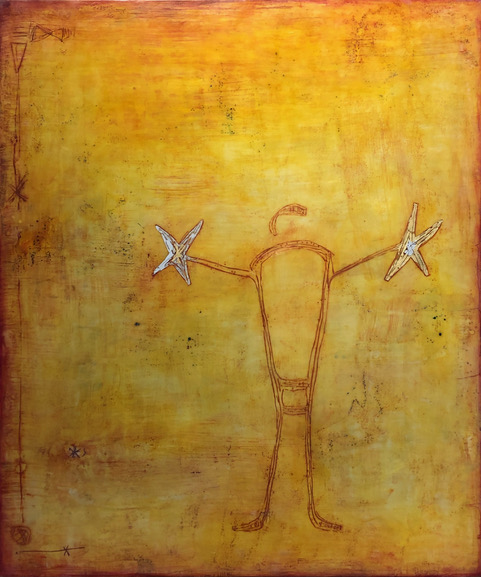 Encaustic – the name derives from a Greek word meaning “burnt in” – was one of the the principal styles of painting in the ancient world. dating back to 5th-century B.C. The technique involves melting dakar crystals, a pine sap, in beeswax to which dry colored pigments are added. The hot liquid or paste is then applied to the surface, which hardens quickly. Once the wax paint cools, additional layers can be added to achieve depth and texture, color layered upon color, to create vibrant color fields of burnt orange, sea blue,  blood red, and more onto which Schilling can make her marks with carving tools: stipples, scratches, and stylized shapes, the glyphs of her unique iconography – stick figures, suns, indeterminate squiggles – all razzle-dazzling with metallic paint. 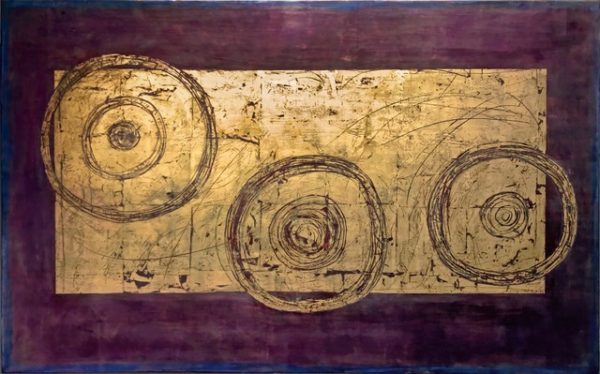 These are dreamscapes that pulse with raw energy.

But what does it all mean?

“Petroglyphs capture both a moment of a story and the myth captured within,” explained Schilling.

Each painting is paired with a quote or poem that opens a door on the ancient mystery – or deepens the secret.