The 5th annual three-day-long, incendiary art blockbuster known as the Telluride Fire Festival takes place December 6-8, 2019.  An opening reception for the weekend is happening at the Slate Gray Gallery on December 5, 4-7 p.m., when the art of Telluride local Ben Kapp is featured. Go here for a Festival overview. For a full schedule of all the hot events, go here. 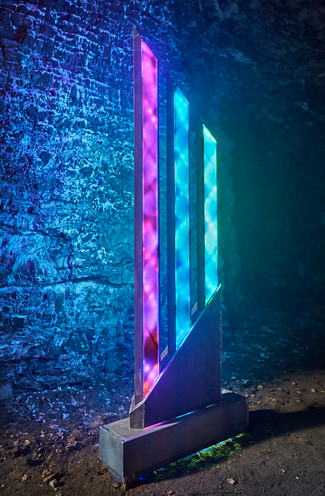 It was early days when the word came down from on high: “Let there be light.” And a fraternity of artists took the cue as gospel, choosing to use light as their medium of expression to create sculptures that produce light or work as art pieces by manipulating light, color, and shadow.

That list of creatives includes Dan Flavin. In fact, few artists can boast of having explored a single medium, an unusual one at that, as tenaciously and consistently as Flavin with his signature fluorescent light tubes. Other also notable proponents of the medium are conceptual artist Jenny Holtzer; Robert W. Irwin, who became known for site-specific, architectural interventions that alter the physical, sensory, and temporal experience of space; and James Turrell, a talent likewise preoccupied with light and space. (Truth be told, light art became a thing in late 20th century due in large part to the pioneering work of Irwin and Turrell. In 1960,  the duo was part of an experimental program at the LA County Museum of Art.)

Telluride local Ben Kapp is hoping to add his name to that list of, well, luminaries. Kapp is showcasing his latest creations at the Slate Gray Gallery during the Telluride Fire Festival, December 6 – 8. The opening reception is December 5, 4 – 7 p.m., (although Kapp’s sculptures will also be on display on December 4 for Noel Night and December 19th for Telluride Arts' Art Walk).

Born in the White Mountains of Show Low, Arizona, and raised near Snowflake, Arizona, Ben Kapp grew up surrounded by the stark beauty of the desert. In that context, the artist credits his father and mother as his muses, as the people who helped shaped his creative vision: “My father worked in construction. He gave me a mind for figuring out how to build and problem solve. My mother worked as a teacher. She instilled a deep appreciation for the mysteries of the universe, science, and color.”

In high school, Kapp learned to weld and to craft wood. He also took an art class. But it was an introduction to the work of the iconic British sculptor Henry Moore and his elegant abstractions of the natural world fashioned in stone, wood, and other organic materials that inspired him to become a sculptor too, but one who would use light to enhance narratives written in wood and metal. “Using bright light to illuminate a piece seemed to lend a sense of life to something that might otherwise be viewed as a mass of inert materials.”

After graduating college, Kapp traveled the country. He discovered Telluride when friend invited him to the Jazz Festival. Overwhelmed by the natural beauty of the place, Kapp, like so many before him, did whatever he could to stay in town, working odd jobs such as landscaping, masonry, maintenance, carpet cleaning, water remediation, and so on. He also became a proud volunteer firefighter. Still is. Early on, Kapp also found the Deep Creek Mine, where he was able to secure a space that became his studio.

“For eight years now, I have collaborated with other artists in the space, hosting events through the artists’ collective, Deep Creek Experimental.”

Working with light, having access to Light Emitting Diodes (LEDs) was a game-changer for the emerging artist, “With the advent of the technological age we now live in, the capacity for light to be infused into almost any given form is a dynamic that offers what seems like infinite possibilities. There really is no limit to what can be done with light and form.”

Through his start-up, ARC DEKO LLC, Kapp plans to expand the scope of his work to provide custom, innovative light sculptures to a broad range of customers who also are captivated by this relatively new, edgy form of creative expression.