The title of one of two major shows at Slate Gray South, Sealed in History, neatly sums up the work of artist Amy Van Winkle. In today’s crazy world finding balance is like trying to find the Holy Grail. Amy’s encaustics offer a reprieve. They allow us all to exhale.

At first glance it is the overall compositional integrity, the solid geometry of rectangles, circles and hexagons, the repeating patterns, that satisfy our craving for order and symmetry. However, that feeling of serenity that comes from viewing Amy’s paintings goes beyond their solid architecture to her compositional elements: dense, layered images make the past present and the present richer.

Amy’s paintings, dialogues of opaque and transparent layers, are about connections too. Hers to the accumulated language of modern art. Hers to the places she has lived – Massachusetts, Chicago, Hong Kong, Santa Fe and Telluride. Ours to ourselves through associations to the numerous discrete element exposed through the heating and scraping of surfaces.

In that regard, Amy’s work could accurately be described as palimpsest, defined as “something reused or altered, but still bearing visible traces of its earlier form.”

In Amy’s new work layers seems to float to the foreground, then recede into memory. What was partially rubbed out, however, remains highly evocative. 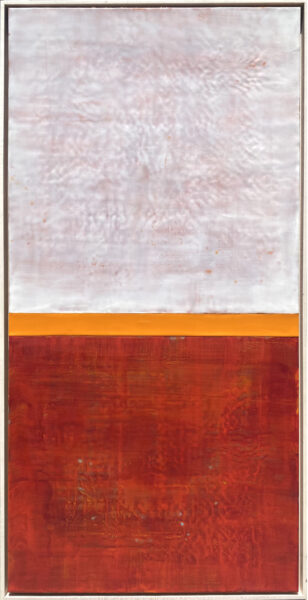 The concept is summed up in a curatorial statement by Gallery Director Krissy Kula.

…” Each piece develops as the layers build one on top of the other; heated beeswax, dammar resin, pigment, let the wax cool, and then repeat until 10 to 20 coats deep. The time-consuming process is methodical yet spontaneous. Colors are laid down across the panel with precision to create a sense of a horizon, but then there’s an element of surprise as the scraper or torch hits the piece. Some layers become sealed in the history of the painting while others are exposed through heating and scraping at the surface. The finished product –a color field one can get lost in the small details, discovering something new every interaction, finding peace in the simplicity. While void of figure or object, the focus shifts to the texture of the surface, tones and hues of the pigment peaking through, and subtle traces of gestures throughout the painting. Her paintings tell tales of space, time, and transition – they are her ‘soulscapes.’”

Amy underlines the point: “There’s a distinct relationship between the layers of my paintings and my own life experiences. Choosing to reveal certain elements of my history and keeping certain memories hidden and private.”

Also of note in Amy’s new body of work is the prevalence of the color blue. 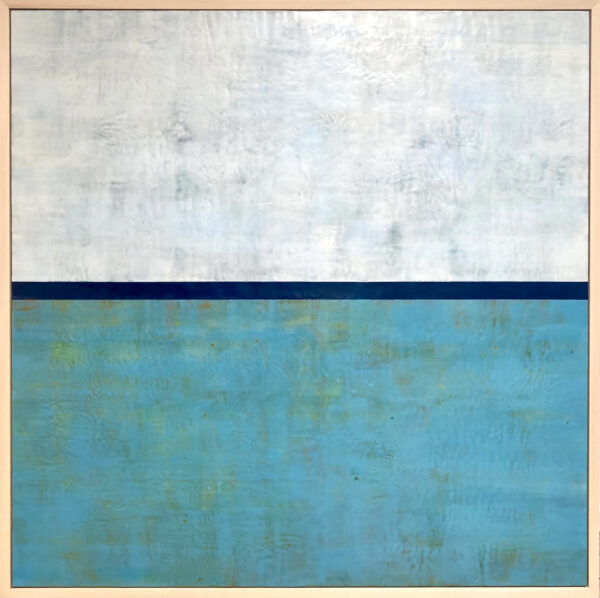 According to the author of a book titled “Blue,” the color in all its variations has had a long and topsy-turvy history in the Western world: “Once considered a hot color, it is now icy cool. The ancient Greeks scorned it as ugly and barbaric, but Americans and Europeans now pick it as their favorite color…”

“White light scatters all colors, but only blue holds in its changeable depth the mysteries of the human condition. The blueness of blue contains the profundity of faith, life, grief and joy; even the world is blue from a distance. Blue’s importance in the modern era is telling in the many expressions that are used in language; words that invoke nuances of mood and a wide range of meaning, from melancholy and rarity to sexually explicit activity…”

Artist/philosopher Kandinsky sums up: “Blue is the typical heavenly color, the ultimate feeling it creates is one of rest.”

“The past couple years have been especially challenging,” explains Amy. “Playing with colors to create a mood or elicit an emotion has always been a big part of why I create. I love working in all different tones of blue and watching how the different shades change based on which colors are layered below it. Blues can elicit so many different kinds of feelings, from calm and passive to energetic and exciting.”

Amy Van Winkle’s past work has been reliably rectilinear. Her new paintings come in a variety of shapes: square and rectangular, yes, but also round and hexagonal. What’s up with that change?

“In 2021 I began working with a new panel/frame company that specializes in custom panels and shapes. I was searching for a new way to create and show my work and shaped panels seems like a great way to start. I wanted to challenge myself and see if my work would translate on to different shapes like hexagonal panels shaped like beehives. I’ve been more than happy with the results.”

Amy’s work begs comparisons to Mark Rothko, an Abstract Expressionist renowned for luminous, transcendental landscapes and in-your-face fields of color. While similar, however, the two artists part company on intention: Rothko was after spiritual transcendence; Amy, well, she’s a talented woman after a good time.

“It’s simple: I create art because it makes me happy. I try not to overthink the process of what I’m painting and let my intuition be my guide. I love laying paint and making marks that are both hidden and seen by the viewer. Painting is meditative for me. It’s one of the few ways I stay grounded and in the moment.”

Amy’s muse? Home – or homes. Recently, her paintings are influenced by the colors of the light, the vibrant landscapes and deeply saturated hues of the sunsets of Santa Fe, where she lives with husband Mike, son Declan, and two dogs, Seamus and Oliver:

“I find my major artistic influence in my daily surroundings. I am seriously blessed to split my time between two majestic places. The light, the skies and the sunsets of Santa Fe are like nothing I’ve ever experienced before. The contrast between sky and land is dramatic. Telluride is where I unwind, hike, ski and refresh. The time I spend in Telluride plays a huge role in resetting my creativity.”

What does Amy Van Winkle hope viewers will take away from her work?

“I love when my work makes someone stop in their tracks, drawing them in for a closer look. A person who appreciates all the details in a piece and feels a sense of wonder or calm or happiness while viewing is the best compliment I could ever hope to receive.” 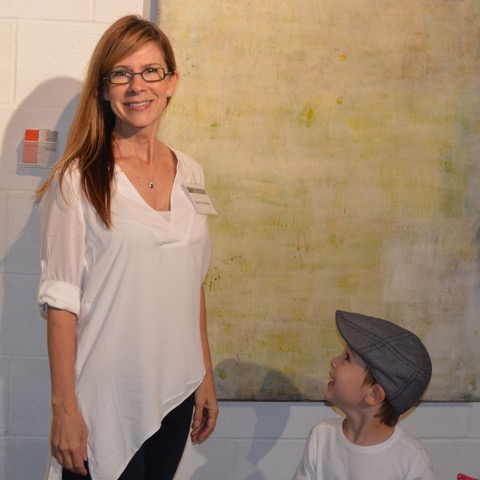 Amy was born in Norwood, MA. After a few moves and the tragic loss of her brother Peter, her family settled in the suburbs of Chicago when she was seven. Her early artistic pursuits involved spending hours in her room with a pencil and a sketchpad.

In 2000, Amy moved to Hong Kong and began exploring Southeast Asia. The experience opened up a whole new world of art, culture and the desire for exploration. She opened up a home décor shop and art gallery in Chicago in September of 2001, during which time Amy started showing and selling her work in earnest.

Amy is a self-taught artist, working mainly in the medium of encaustic. Although she creates quite spontaneously, there’s always a hint of structure and control to her paintings. Space, time and transition are common themes in her work.

Amy moved with her family to Santa Fe, NM, in 2016. They also have a home in Telluride which they visit as often as possible. The mountains, sunsets and blue skies of New Mexico and Colorado have a huge influence on Amy’s art. Amy is represented by galleries in the U.S., as well as in Taiwan. She is widely collected in both private and corporate collections.

Written by:
SUSAN VIEBROCK
Susan is Telluride Inside… and Out’s founder and editor-in-chief, the visionary on the team, in charge of content, concept and development. Susan has covered Telluride’s cultural economy, which includes non-profits and special events, since 1993. Much of her writing features high-profile individuals in the arts, entertainment, business, and politics. She is a former Citibank executive specializing in strategic planning and new business development, and a certified Viniyoga instructor.