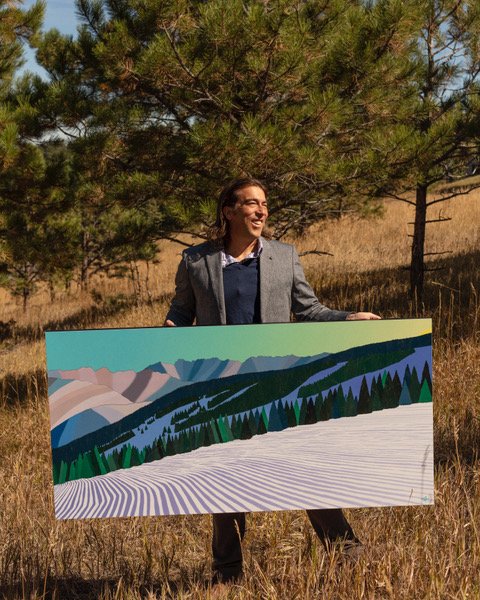 Twin Peaks. The artists Matisse and Picasso. The former was renowned as a color-obsessed voluptuary who once called for “an art off balance, of purity and serenity”; the latter, a notorious bomb-thrower was quoted as saying: “In my case a picture is a sum of destructions.”

Yet both men in their different ways were trailblazers whose radical ideas changed the course of painting forever.

And both were major influences on the work of contemporary artist Topher Straus, whose unconventional, highly stylized images on large-scale metal sheets are featured at Telluride’s Slate Gray Gallery through the month of March in a show titled “Rendering the West.”

Matisse, Picasso – and award-winning director Robert Altman for whom Topher once worked.

“Their sense of composition, color and line inspires me always to push my own boundaries and figure out my own individual perspective. In particular, Matisse’s ‘Landscape at the Collioure’ helped me understand the different rhythms in nature. The way he used line to create flow in his landscape is one of the many gifts that made him a master. And, In my art, I try to tell a story – create a tapestry of stories – the way Bob taught me.” 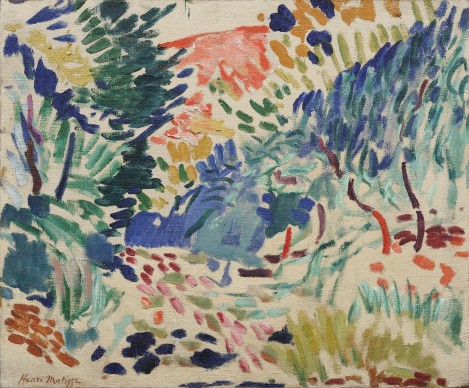 And, in the end, Topher’s spare approach to his principal muse, Mother Nature, reflects the signature economies of all three titans. His art comes down to minimal yet essential abbreviations of his worlds, natural and urban, devoid of clutter, frontiers of joy that open up vistas we may have looked at, but not really seen.

“A large part of my art is the first step, the actual journey, experiencing nature in person. Whether it’s the delicate eyelashes of an elephant up-close or the continually changing hues around me, I’ve learned that all the parts create the magical whole…Growing up in Colorado and hiking and skiing the mountains as a youth, I naturally became passionate about the outdoors and preservation. It’s no coincidence I chose the iconic vistas of America’s national parks as my first major focus.” 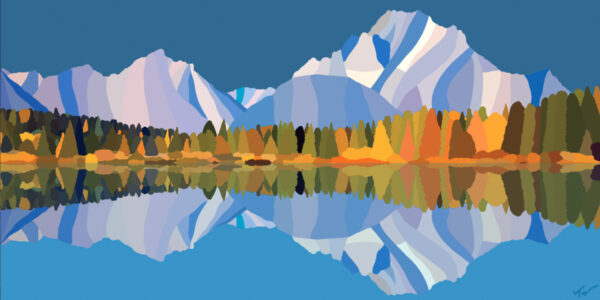 Out of the gate, Topher was predisposed to a career in fine art. It was is in his cultural DNA:

“My great grandfather immigrated to Leadville Colorado during the silver rush in from the kingdom of Bavaria Germany in 1854. He opened a dry goods store which would later become one of our nations largest department stores The May Company. His daughter and my grandmother, Florene May, used her wealth and knowledge of fine art to acquire a fantastic collection, including Picassos, Matisses and Miros.

“I grew up visiting Florene in her New York apartment surrounded by these masterworks. I would like to believe the colors and lines in these extraordinary paintings shaped the work I am creating today. Eventually Florene donated those paintings to New York’s Museum of Modern Art and The Met. Her generous sense of giving and community, along with her deep understanding of color and shape, greatly influenced me as an adult.”

But it was performing art, not fine art, that first captured Topher’s heart and talent:

“I envisioned myself as a film director, but once I obtained that goal I realized it wasn’t what I wanted. The life just did not speak to me, nor would I ever be able to obtain my vision of success because there was always the next level. Enough would never be enough.”

In fact, becoming a fine artist was the furthest thing from Topher’s young mind:

“I was forced into fine art. In high school, I was an athlete and a successful actor, having appeared in over 350 commercials and winning a Heartland Emmy. I wanted to be a filmmaker, but in order to study film at Syracuse University I had to take an art course during my freshman year.”

From that requirement, making art become something immensely personal for Topher, who would use the canvas to express things he did not know how to express verbally, the tragedy of 9/11 or gentrification in Africa among them:

“No more than 15 people would see my over 70 acrylic paintings over the next two decades. I wasn’t ready to share my vision with the world. It wasn’t until going through a difficult divorce and the desire to be a role model for my son, Oliver Viking, that I would open up my heart and share my work. It was 2019 when I had my first show. And now I feel blessed to be where I am and understand things happened when they needed to. If I stop and take a look, many moments conspired to put me where I am at today.”

To make his art, Topher starts with a photo, often based on a personal experience, then he turns to his computer and stylus to “paint” his interoperation of the image.

“I choose to focus on the true colors I see in nature and base my photos off what I believe to be an iconic perspective. With my film experience, frame and composition are clearly very important. The scale of my work is generally very big. Often people who view an original of about 45 x 90 inches feel like they are in a frame of film.” 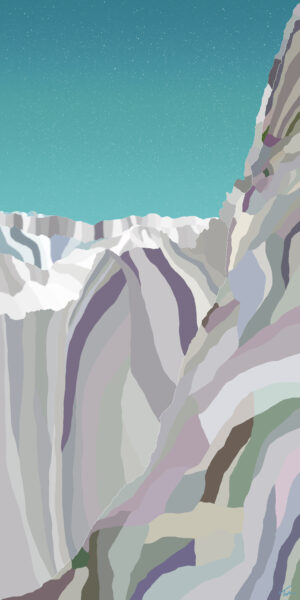 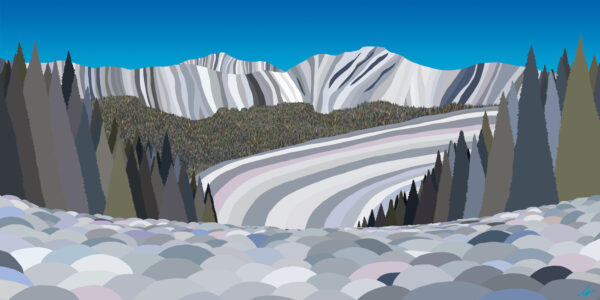 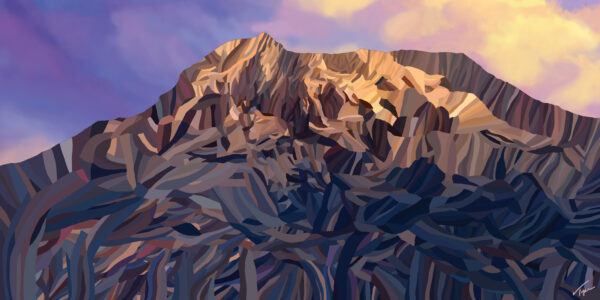 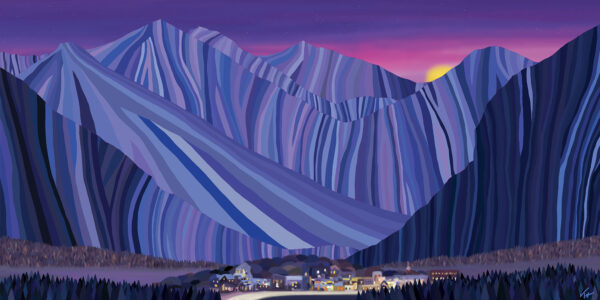 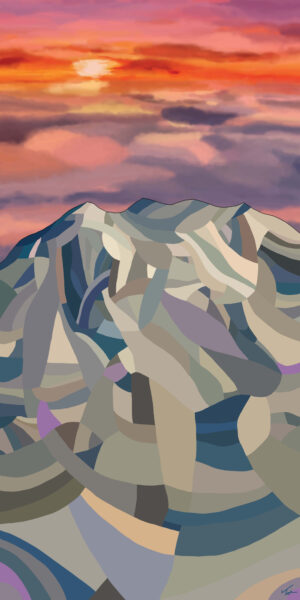 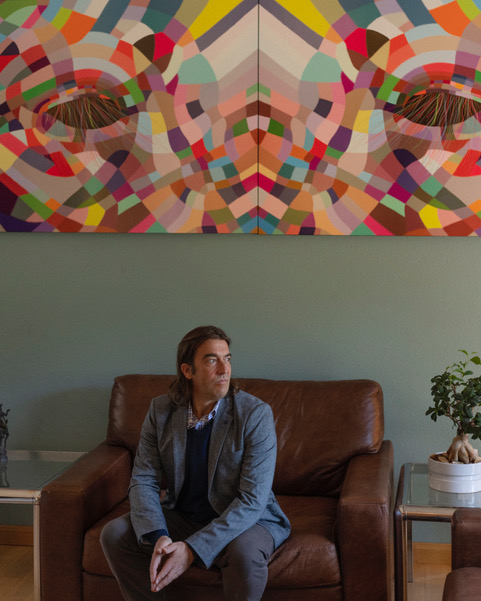 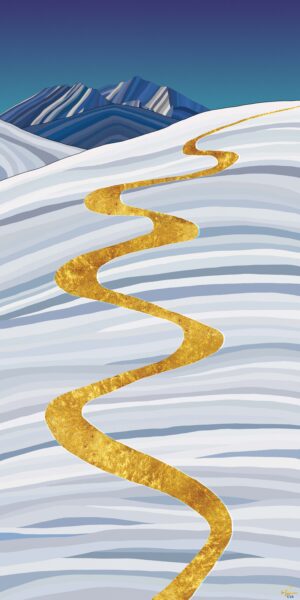 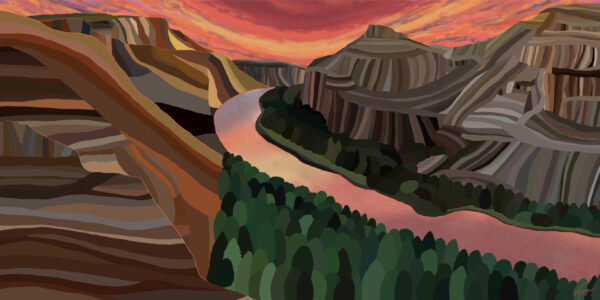 Like his art, Topher comes to his philanthropy naturally:

“My desire to give back to my community began in college when I went to the dedication of my family’s room at MOMA, when Florene donated her collection. I volunteered my time in college teaching school kids comedy improv, something else I was passionate about. Watching how the kids were able to use these skills in life was amazing and very rewarding. When I began sharing my work I decided there was nothing more important than having a mission, which became using the thing I love most doing to help my community.

“Since 2019, I have raised over $50,000 for various foundations and non-profits. And I am extremely proud of this having worked with Conservation Colorado and the Colorado vineyard, Sauvage Spectrum, to launch a wine.

“Using my art in this way gives me purpose. I was drawn to Slate Gray not only for the fantastic collection of artist the gallery features, but also for its focus on giving back to the Telluride community. We share that focus. It is fair to say without that purpose, I would not be able put so much passion and time into my every line.”

(Note: Gallery owner Beth McLaughlin insists that a portion of every Slate Gray sale goes right back out the door into the Telluride community to support arts-based nonprofits. The buck starts there!)

Slate Gray director Krissy Kula worked with Topher to create two new pieces for the show which will debut at “Rendering the West.”

“Krissy was amazing to collaborate with. I really admire her knowledge and passion for art and am excited to see how the Telluride community responds to my ‘Telluride’ and ‘Moonlight’ originals. What an honor to have a solo exhibition in one of the world’s most stunning landscapes.” 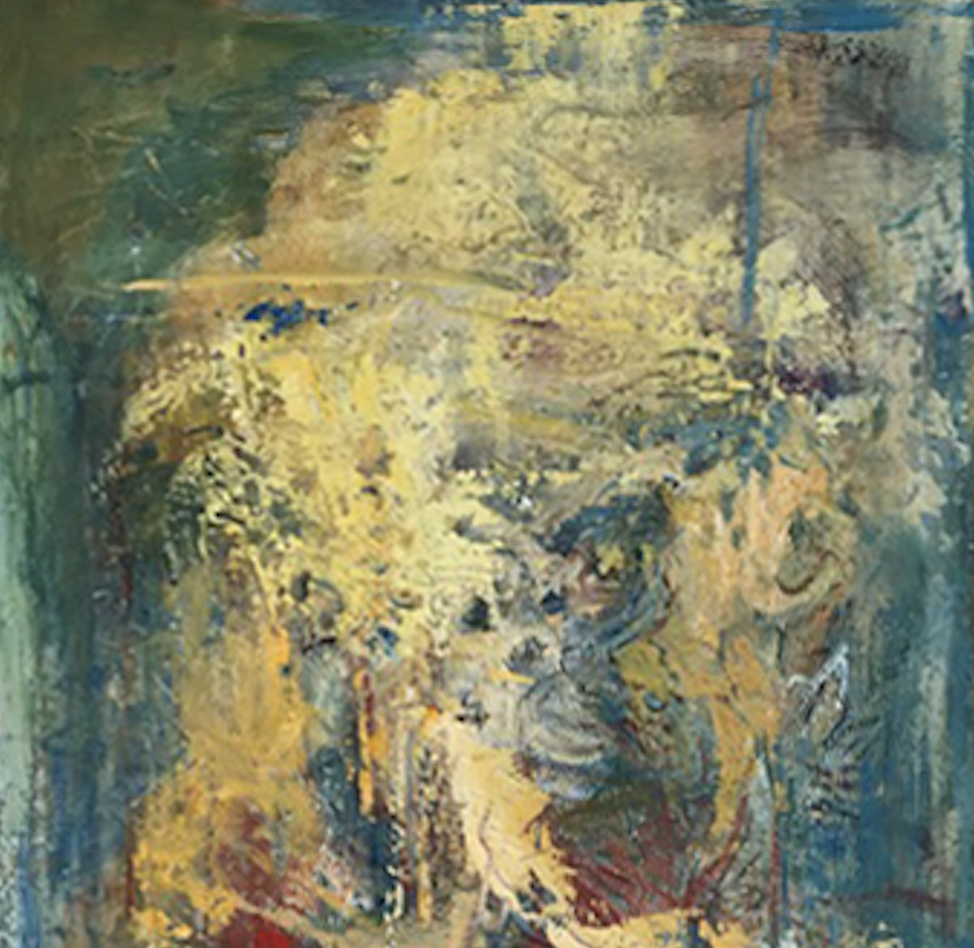 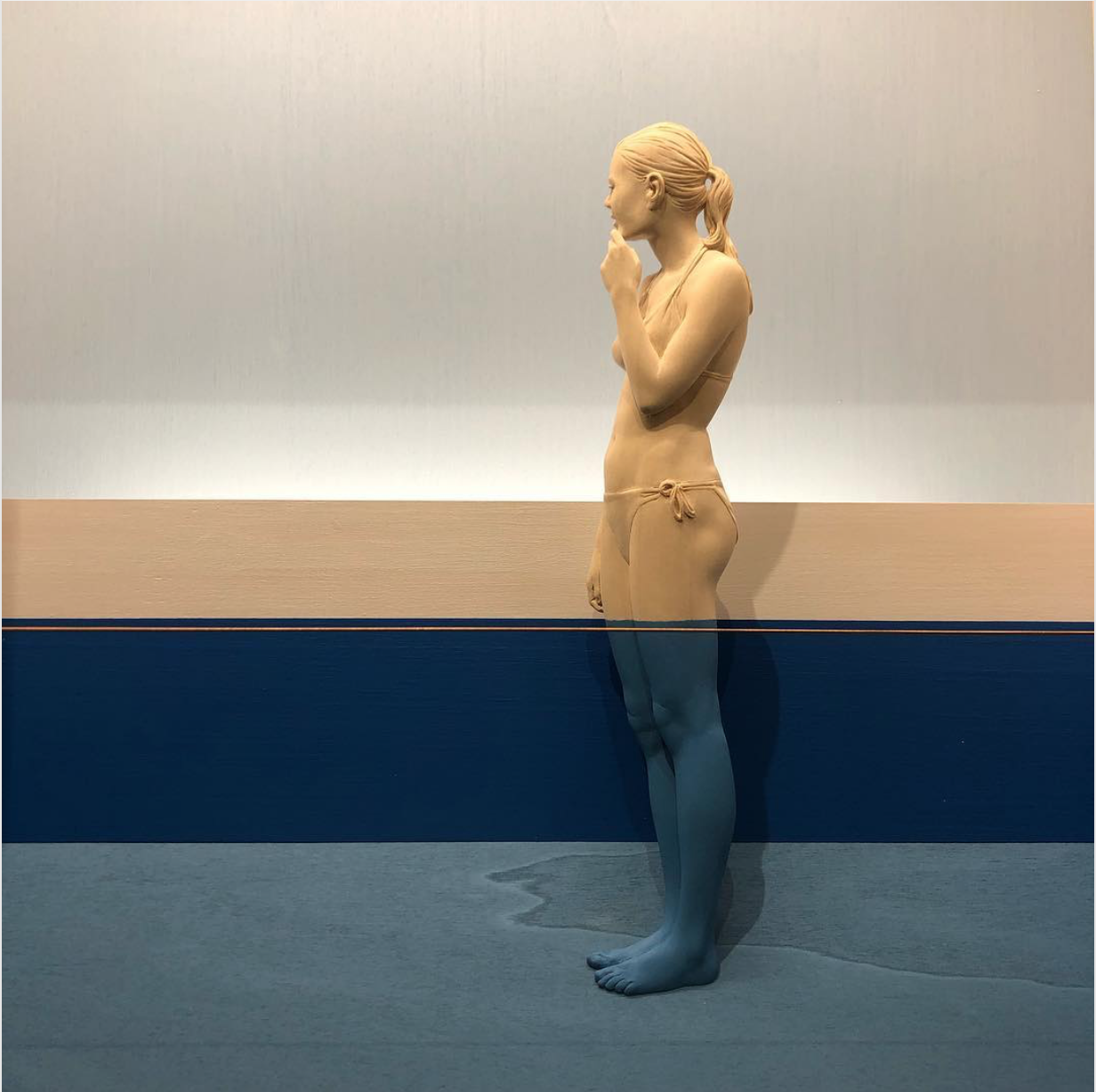 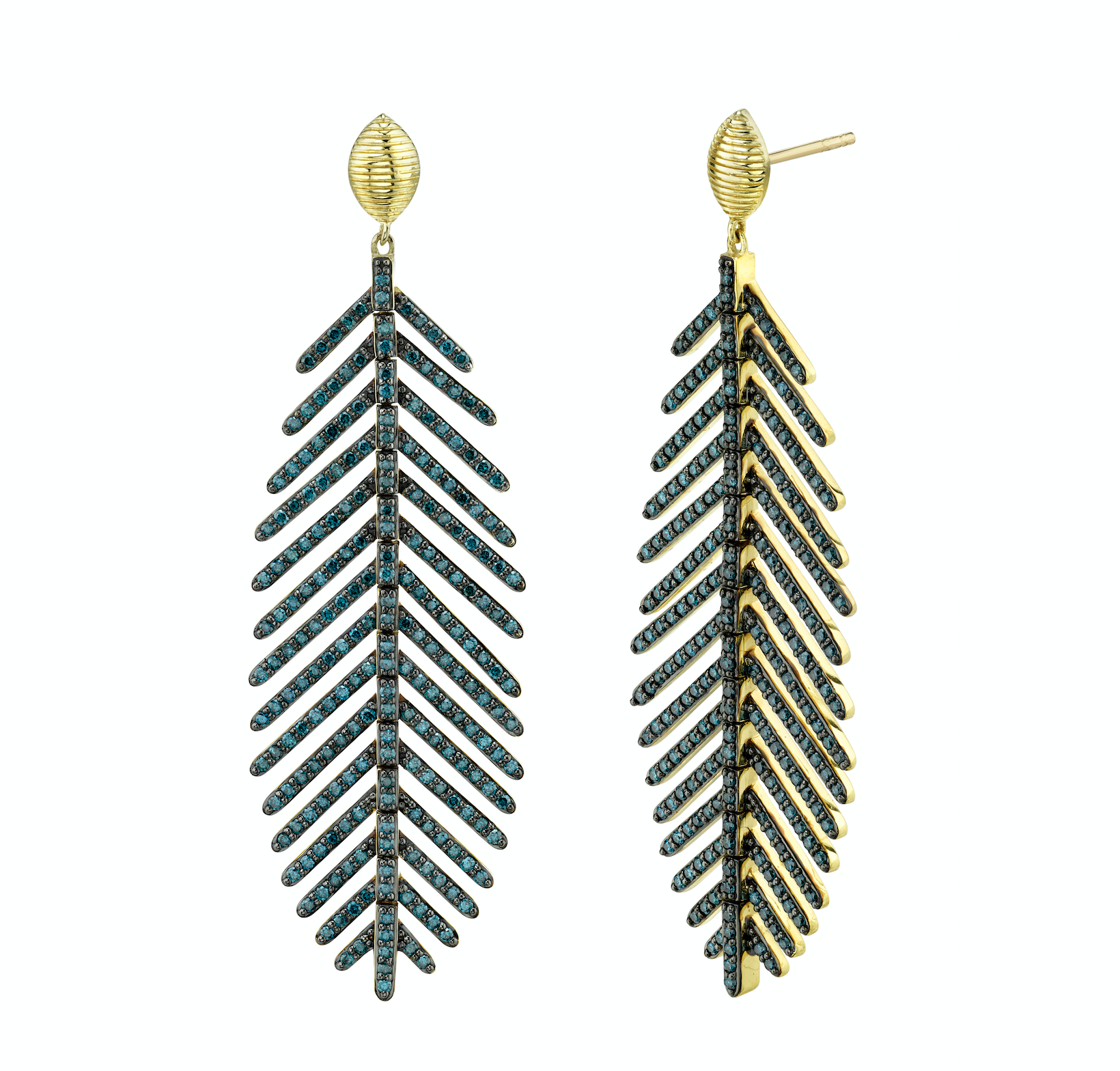