Georgia O’Keefe & “Women from the Faraway”: 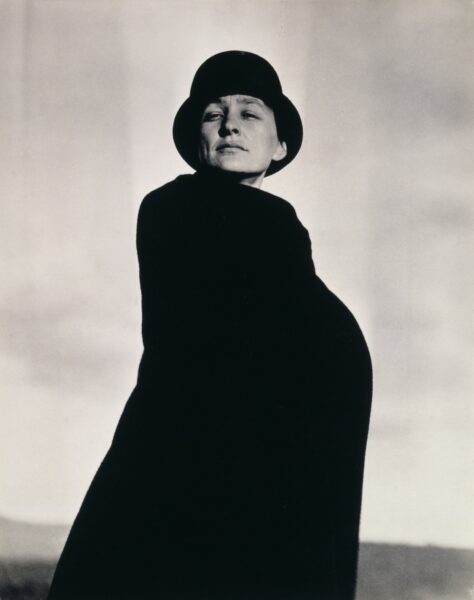 Legendary photographer and gallerist Albert Stieglitz was an influencer before there were influencers. He certainly knew a good thing when he saw it. Sent the work of a beautiful young graphic designer and fine artist by one of her former classmates, Stieglitz was gobsmacked: he had to hang the images on the walls of his avant-garde Gallery 291, (at 291 Fifth Avenue), also the staging ground for an elite fraternity of burgeoning art world alpha males, among them, Rodin, Matisse, Picasso, Duchamp, and Brancusi.

Back then, Stieglitz is alleged to have declared “Finally a woman on paper,” words that morphed into a mixed blessing because they opened the door to a highly sexualized interpretation – however true – of Georgia O’Keeffe’s work (particularly her florals). Nevertheless a star was born.

Later, reputation and myth secured as aa pioneering painter and feminist icon, O’Keefe rebuked the claim, declaring it said more about the viewer than her artistic intentions. But methinks the lady protested too much – and/or those protests were about something else, about the idea, or a variation on the theme, “She threw well – for a girl.” “Ran well – for a girl.” In short, O’Keeffe’s objection to anatomical interpretations of her work feels like nothing more than her taking exception to Stieglitz’s contention that art made by a man was naturally, inherently different (and better) than art made by a woman. Best guess is that in O’Keefe’s mind, good or bad, art was art. Gender did not, ahem, enter the picture.

Gender does, however, enter the pictures on the wall of the Slate Gray Gallery throughout the month of March – if only in that the group show is titled “Women from the Faraway,” a tribute to O’Keefe, who lovingly described the desert of New Mexico as “The Faraway Nearby.”

And, as the first female American modernist artist, Georgia O’Keefe is clearly the eminence grise of the sorority featured at Slate Gray, where being seen through a gendered lens is not a bad thing. “Women from the Faraway” features the work of Martha Rea Baker, Alexandra Eldridge, Ali Lauder, Bette Ridgeway, Kathrine Tatum, and Amy Van Winkle.

Women from the Faraway:

Bette Ridgeway, abstract painter of color, space and time and winner of Michelangelo International Prize 2021, first up because she is also the newest addition to the Slate Gray stable: 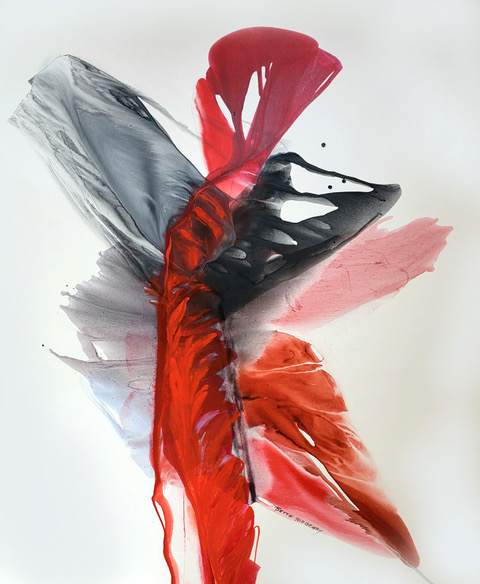 An Aria for RBG, Bette Ridgeway

The Michelangelo International Prize is awarded to artists worldwide who have made important contributions to the art of painting, architecture and sculpture, as well as art theory. One of the most prestigious art awards presented in Florence, Italy, it is also highly recognized internationally by the academic world. For her large-scale, luminous, poured canvases that push the boundaries of light, color and design, in January 2021, painter Bette Ridgeway received the coveted tribute.

Honoring Ridgeway’s work, Dr. Salvatore Russo Rome – he curated the Michelangelo Prize this year – described the artist as “The true heir of Paul Jenkins’ paintings as a ritual. The spiritual in art, which takes shape through a ‘slowed down’ process based on the indistinguishable union between time – space – color. (In Ridgeway’s hands) the canvas becomes a diary in which to write down your emotions, your feelings and, above all, where you can freely express your ideas.”

Early on, the American Master Paul Jenkins adopted a tactile, chance-driven method of working, dribbling the medium Jackson Pollock-like, onto loose canvasses. His paint rolled, pooled and bled onto surfaces that magically evolved into psychedelic landscapes. 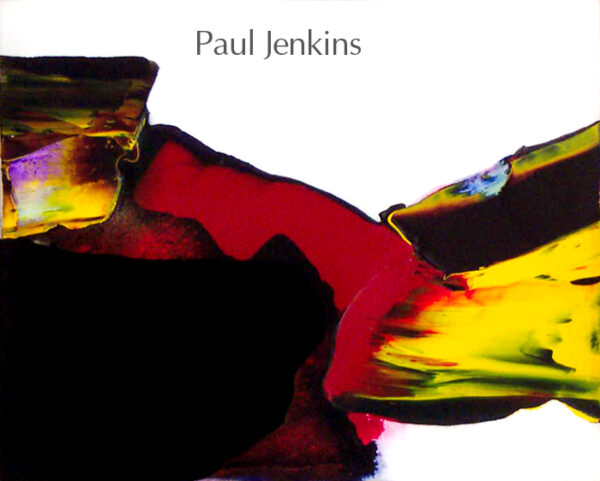 Jenkins’s career began in the 1950s, in the wake of the Abstract Expressionists, but was spurred on by Color Field painting that followed. Like Jenkins, Ridgeway’s eye-popping work lives and breathes at the nexus of those two schools of American art, one action-oriented; the other more cerebral and “pure” or art for art’s sake. In the hands of  masters, the work is sensuous enough to be PG-rated.

Ridgeway once described her first encounter with the paintings of the man who would become her mentor:

“I walked into Gimpel & Weitzenhoffer Gallery in 1978 in New York, the entire space was filled with enormous canvas paintings by Paul Jenkins. It completely stunned me. It was a ‘color storm’ of the most incredibly powerful poured-paintings in primary colors. My body went numb and I wept. It was a soul-stirring experience that took my breath away. As I studied each painting, I had (what I now know) was an out-of-body experience. It was the entirety of the exhibition that filled my heart, mind and spirit.”

Ridgeway has spent four decades (and counting) developing her signature technique, which she describes simply as “layering light.” As is the case with Jenkins’ oeuvre, Ridgeway’s images suggests a pas de deux between luminous colors (created by the artist herself in a blender) and rhythmic movement. 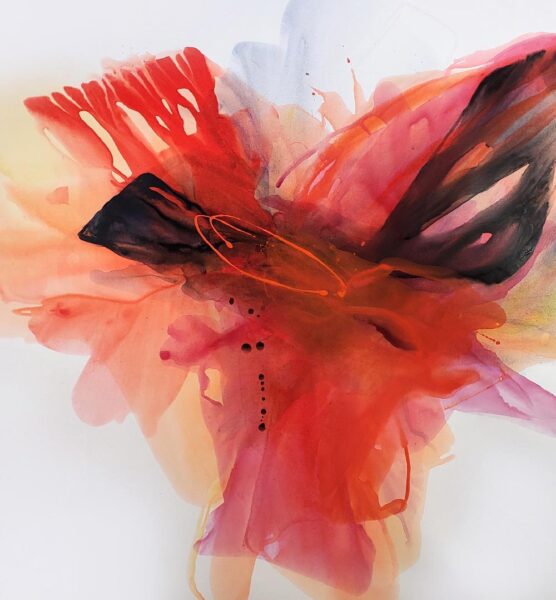 “Devoted to the powerful autonomy and perceptual properties of color; New Mexico-based artist Bette Ridgeway has spent her artistic career developing a radiant body of abstractions that place her at the forefront of the second-generation of Abstract Expressionists,” said Laurence F. Jonson of the AACR Gallery.

Jenkins himself once described Ridgeway’s work as “controlled chaos.”

Initially trained as a watercolorist, the artist’s love affair with water media began as a youngster growing up in the Adirondack Mountains in upstate New York, surrounded by natural beauty.

Ridgeway went on travel the globe, studying, painting, teaching and exhibiting her work, while embracing the customs and colors of the diverse cultures of Africa, Australia, Europe, Asia, Central and South America.

Her formal art studies at Russell Sage College, New York School of Interior Design and the Art Students League gave the artist the basic tools in the use of materials and technique.

Her celebrated signature style, however, was a long time coming,  artistic foundations in watercolor, line drawing, graphic design, and oils ultimately giving way to acrylics, which the artist found to be more versatile for layering. 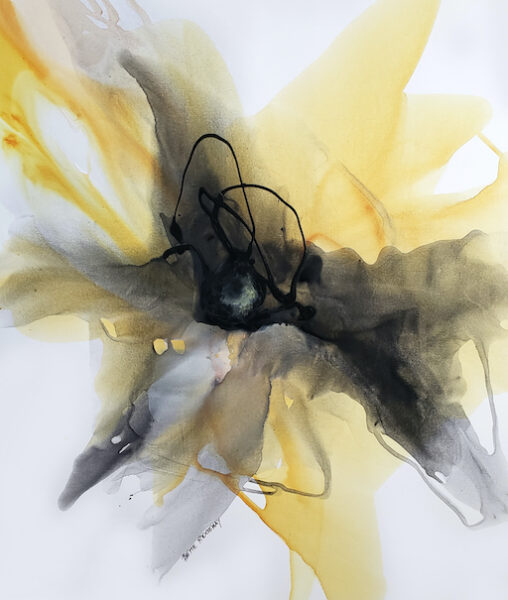 A Time Before Thought, Bette Ridgeway

“My career began in the sweatshop of Reuben Donnelley Advertising as a young graphic artist and, over many decades, has taken me to the outdoor marketplaces in Tananarive, Madagascar; the urban dynamism of Santiago, Chile, and the modern youthful capital of Australia in New South Wales…Canberra. And many stops in between,” explained the artist.

Since 1996 Ridgeway has maintained an art practice in Santa Fe, NM, where she claims the high desert light fuels her spirit – shades of O’Keefe. 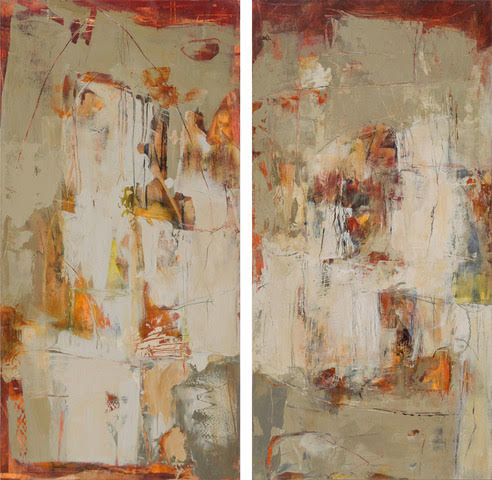 Like Ridgeway, Martha Rae Baker is an action painter or an Abstract Expressionist 2.0, in the lineage of the fraternity formed in New York after WWII which included now iconic artists like Pollack, deKooning, Kline, Still and Jenkins. However, the old boy’s club tended to create from macho pathos. Baker makes her distinctive marks from a place of pure joy, working as she does from a light-filled studio in the footprint of the Sangre de Cristo Mountains of Santa Fe, drawing inspiration from nature, poetry, and music.

Baker works primarily in encaustic (melted beeswax fused with heat), but also in oil/cold wax and acrylic such as in the images on display at Slate Gray… 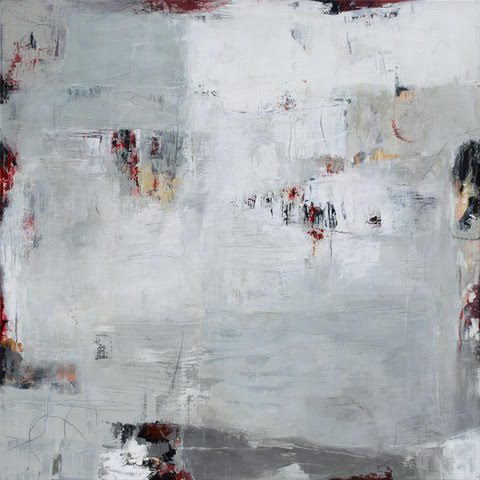 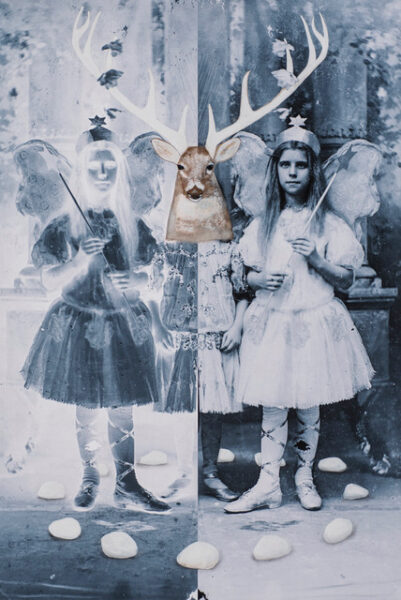 William Blake (November 28, 1757 – August 12, 1827) was an English poet, painter and printmaker, raised in a church that believed in the “Doctrine of Correspondence,” which holds that everything material mirrors something spiritual.

Carl Jung  believed in the “complex,” or emotionally charged associations. He founded analytical psychology and advanced the idea of introvert and extrovert personalities, archetypes, and the power of the unconscious…

Or, in this context, the place where Alexandra Eldridge’s deeply poetic art emerges:

“My paintings come from a place where contradictions are allowed, paradox reigns, and reason is abandoned. My search is for the inherent radiance in all things . . . the extraordinary in the ordinary.

“The process of painting parallels the movement of psyche, helping me to understand the world as a deeper reality. The rich-soul experiences of my life become tangible. Each painting is a small acknowledgment of the inner life that can, perhaps, reveal its own share of soul, and that share of soul may connect to someone else’s share of soul. Then, perhaps, beauty may be granted.” 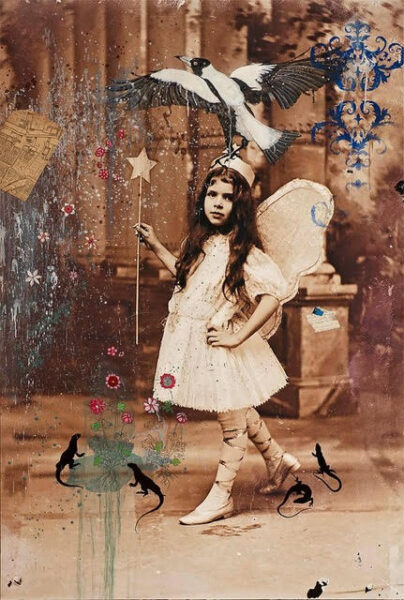 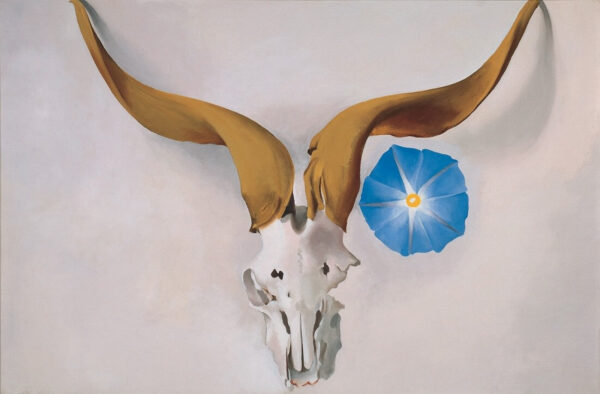 Fast forward about 100 years (from the time Albert Stieglitz discovered O’Keefe in 1916), inspired by O’Keefe, another denizen of New Mexico has also memorializes rams’ heads – and those of other critters like bison, bull, African impala, oryx, and kudu.

In a unique spin on taxidermy, the graceful shape of each animal’s head serves as a 3D, shaped canvas that houses the intricate details of Ali Launer’s art… 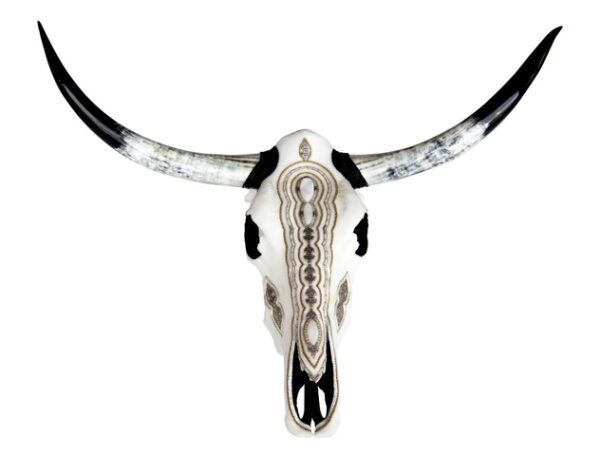 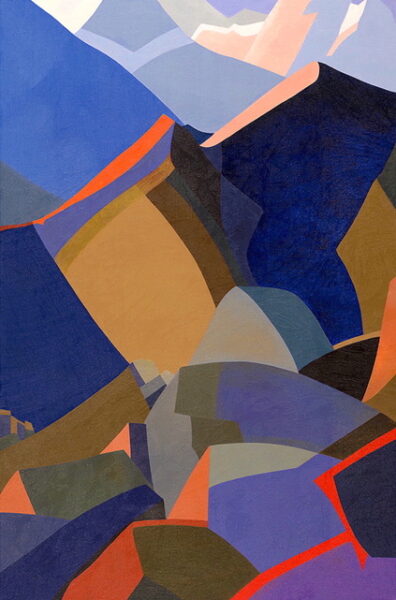 Kathryn Vinson Tatum is a painter of action, capturing the the Rockies of Telluride and Taos, New Mexico, her two homes, in paintings that celebrate the emotional impact of being on top of the world above tree line. In short, “off-piste” describes Tatum both as an artist and as a skier who regularly enjoys shooting the moon.

In 2006, Tatum and her husband began spending six months a year at their ranch in Taos. In 2011, they moved to the town of Ranchos De Taos to be closer to the highly established Taos art scene (while holding onto the ranch).

“That was where my painting techniques developed into a synthesis of Chinese processes and philosophies and Western art techniques and materials. By combining rice paper, charcoal, Chinese ink and brush techniques with acrylic paints and wax, my mixed-media synthesis finally reached its fullest expression…” 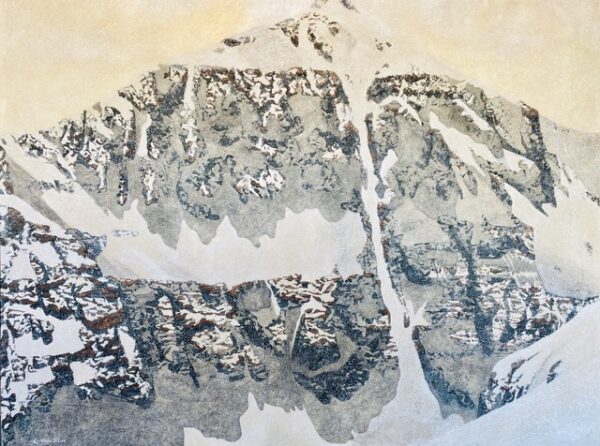 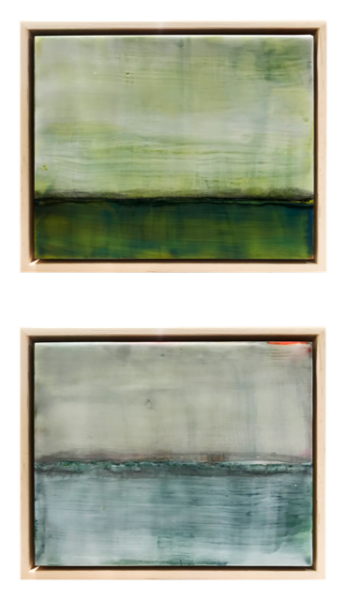 Encaustic painting, the name derived from the Greek word enkaustikos meaning “burnt in,” was one of the the principal styles of painting in the ancient world, dating back at least two millennia. The technique involves using heated beeswax to which colored pigments are added. The liquid or paste is then applied to a surface — usually prepared wood, though canvas and other materials are often used. 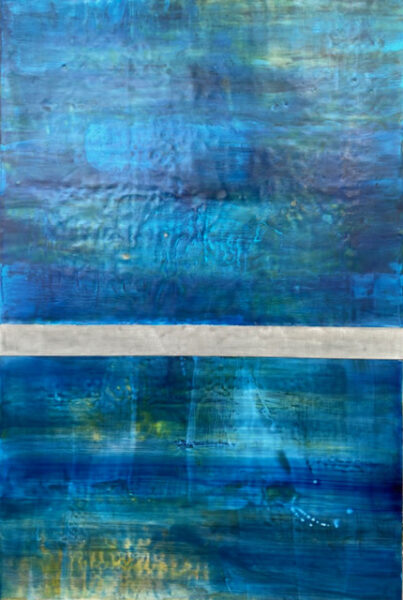