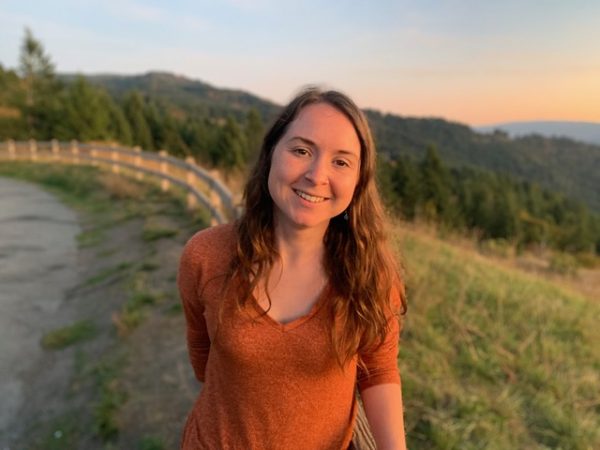 “I found I could say things with color and shapes that I couldn’t say any other way– things I had no words for.” – Georgia O’Keefe.

That quote by the iconic Georgia O’Keefe sums up the gestalt of the latest show at the Slate Gray Gallery, “Melange” – also the work of the new kids on the gallery’s block, Telluride’s own Molly Perrault and Karen Scharer from Pueblo, Colorado.

Molly Perrault is a gifted painter whose primary medium is paper, not paint. The subtext of her work: the natural world and sustainability. 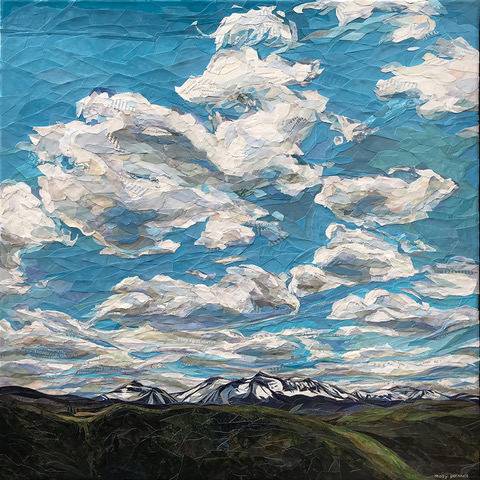 Ever So Slightly by Molly Perrault

An ultimate recycler, this uniquely talented artist uses tiny paper shards carefully cut from magazines for color and texture. She then obsessively, meticulously, seamlessly manipulates these jigsaw puzzle-like pieces to create the illusion of painting without paint.

This detail-oriented approach to making art is also Molly’s way of subverting the artificial colors and sleek, glossy page layouts found everywhere in mainstream print media, which generally promotes superficial values. Instead, her work celebrates the natural world, specifically places that have been sources of inspiration, adventure, and comfort.

Molly’s process then is cyclical: nature is the source of  the paper on which the magazines are printed, then used again to represent nature, underlining acts of destruction and reconstruction, aka, rebirth. 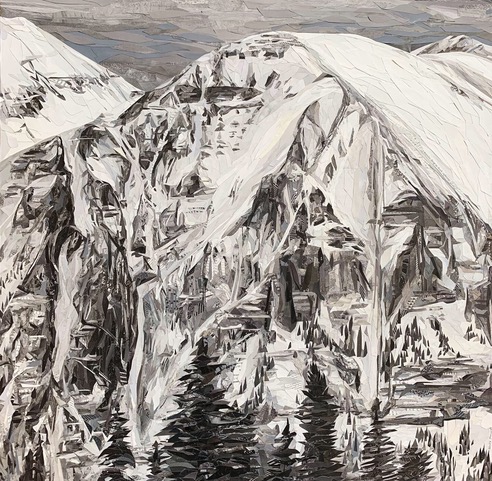 A Massive Drop in Shark Sightings by Molly Perrault

Molly Perrault grew up in South Louisiana and graduated from Louisiana State University, where she earned a Bachelor of Fine Arts.

In 2015, she moved to Colorado to experience the West. In her adopted home, the artist enjoys long road trips, stimulating hikes, and being part of a unique mountain-town community which encourages and supports creativity.

Molly debuted her first solo exhibition, “Regeneration,” in June 2018 at the Telluride Arts HQ Gallery. In August 2019, she was awarded Best in Show at the Annual Ouray County Arts Association Fine Art Show in Ouray, CO.  In February 2019, she was awarded 1st Place in Telluride’s Ah Haa School for the Arts’ Annual Juried Exhibition. 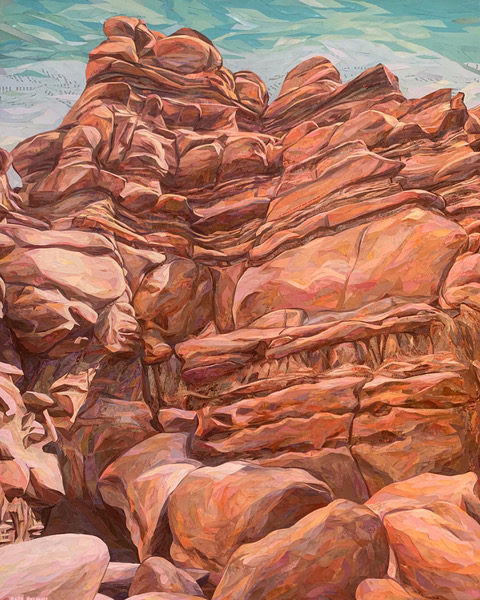 An Attempt to Stave Off Death and Disorder by Molly Perrault 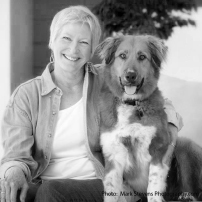 A few stokes of her well-educated paint brush contain the immensity of Mother Nature, the artist’s muse.

Karen Scharer’s home and studio in Pueblo, CO., sit beneath dramatic skies just minutes from the beautiful Arkansas River and a short drive from some of Colorado’s most spectacular mountain peaks, a constant source of inspiration.

“My art reflects my faith in imagination and intuition, and my passion for exploring and communicating the profound beauty of our world and the human experience. Through painting, my ideas and visions become tangible, providing a language to encourage, share, inspire, and uplift. Each painting evolves as if it were a conversation between old friends… sometimes lighthearted and joyful, sometimes contentious or troubling. As a result, each canvas is as individual as the moment in which it was created.” 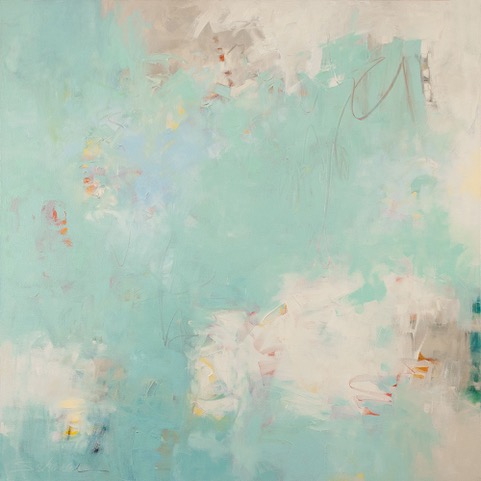 Karen’s talent was in her DNA: her patents were both artists. However, although she showed some early interest in drawing and painting, the artist did not give in to the urge to make her marks seriously until the mid-1980s. A graduate of the University of Montana in 1975, Karen holds a degree in Natural Resource Management, a reflection of her love of the outdoors learned from her father when she was a girl.

In 1976, a job with the Forest Service took Karen from Montana to Boise, Idaho, and eventually to a job with IBM. In 1985, she married husband Al and moved to Albuquerque, New Mexico. It was there Karen began to paint, studying with other remarkable artists.

In 1991, Karen and Al moved to Colorado. After 17 very educational years, n 1997 she left IBM to fully devote her time to her art.

The rest is history in the making. 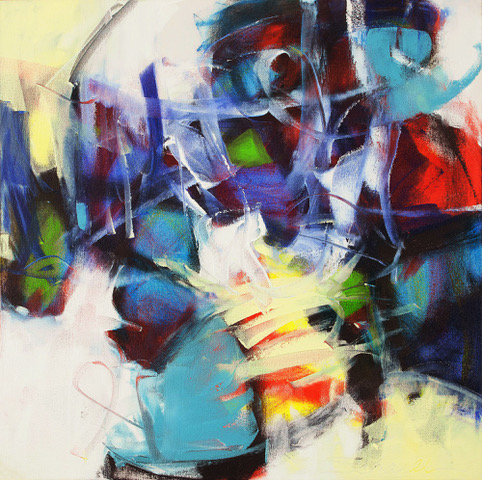 Karen sums up her process:

“My paintings begin as a series of loose glazes of color. As shapes and impressions emerge, successive layers of transparent and opaque paint are applied to develop and enhance the structure, design, and impact of the piece. These layers produce an infinite variety of hues and effects which cannot be achieved solely by mixing color on the palette. The interplay of contrast, movement, texture, balance, shape, line and color creates images that draw the viewer into the creative process, inviting them to see not just with the eye, but also with the heart. Inspiring the viewer to respond to the images I have created is a critical part of bringing each painting to life.” 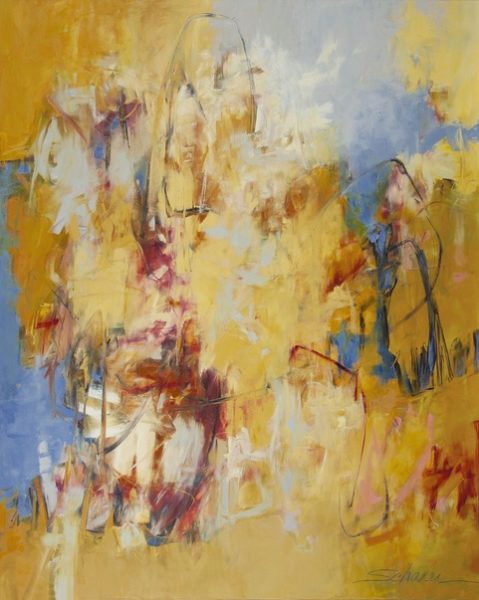 Rounding out the Melange (or Mix) in the Slate Gray stable: 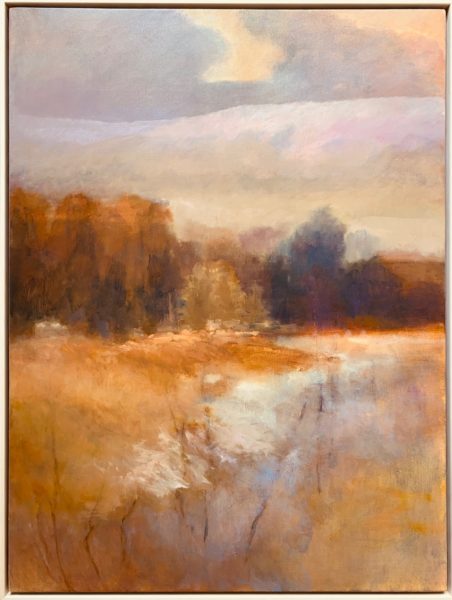 Sylvia Benitez is an artist and curator who spent her formative art years in New York. Now living outside Seguin, she teaches landscape painting in San Antonio, TX.

Between 1880 and 1920, landscape painting espoused a philosophy whose squishy center revolved around human emotion, sensitivity, and an expanded idea of The Sublime (or Divine).

And the beat goes on with artists like Sylvia paying the tradition forward with homespun lyricism, her abstracted landscapes featuring Big Sky/low ground at the nexus of site and insight. Because, in the end, the mirror of art is designed to reflect both the outside world and an artist’s inner landscape.

Paraphrasing Benitez: “A clear artistic path is a gift that reveals the truth about oneself.”

By her own admission, Benitez mines the rich veins of memory to represent a personal, therefore unique, vision of her home base, Texas, (in the words the artist): “Be it the flight of wind, the roll of grass or the ripple of water…”

“My work is painted without the aid or use of photographs. Instead, my oil paintings represent a mélange of mental images—the stuff I see everyday as it plays out against the backdrop of the ever-changing Texas landscape. This is the visual bank I pull from… And the stored memories pour out and jumble, reconfiguring on my canvas as new impressions of place and time and weather—alive…” 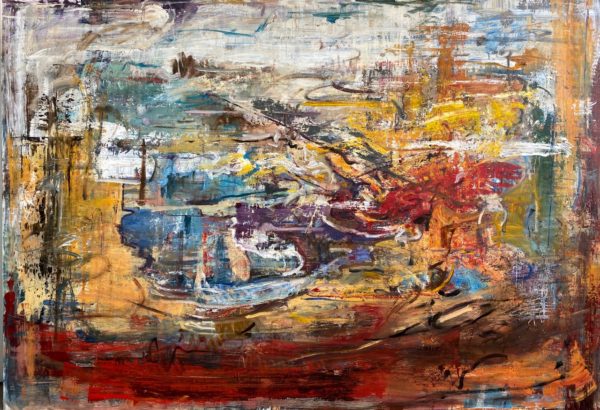 Abstract Expressionism is painting in the zone during which time an artist’s creative interaction with his materials is just as important as the finished product.

The means justify the ends.

Welcome to the world of Andrew Brown, a Southwest Colorado native and son of renowned landscape artist Gordon Brown. Father and son share a studio, a converted barn, down the road apiece from Telluride in Norwood.

While Brown père’s work depicts an idealized, somewhat (or entirely) abstracted, natural world, landscapes, and seascapes, young Brown’s art is raw and intense, reflecting the turbulence of hungry youth. While both artists share, however, is a desire to capture a mood, not the physical surroundings themselves.

In the end, there is lots going on under Andrew Brown’s roiling, vivid surfaces as he projects a feeling onto a canvas or board and infuses it with light and color.