Open a larger version of the following image in a popup:
Share

Japan is home to the oldest known ceramics in the world. But the country is a long long way from Long Island City, Queens, New York, the location of Japanese-American artist Angela Okajima-Kempinas’s studio. There AOK (as she signs her wall art) does her part to hold up the millennia-old artistic tradition. But AOK is doing that discipline her way. Which is AOK. 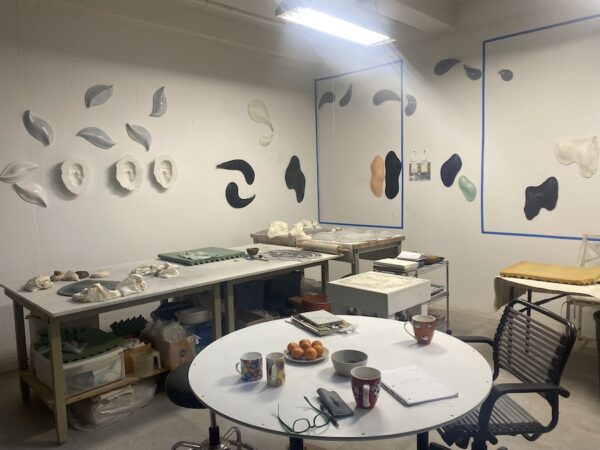 Originally the ceramic tradition in Japan was all about form following function. Pottery towns all over the country served people’s daily needs for plates, cups and vessels or were steeped (pun intended) in the customs of tea ceremonies and sake-drinking rituals.

However, after WWII appreciation of Japanese ceramics came to extend beyond their practical applications and moved into the more rarefied world of fine art. The shift saw Japanese potters producing abstract, sculptural works, unusual, largely functionally useless shapes, which favored form over function.

Useless unless the walls of your home are calling out for dimensional paintings. That is how AOK defines her creations: biomorphic forms that refer to and/or evoke living forms such as plants or the human body – like the work of Arp, Miro, Klee for three examples. 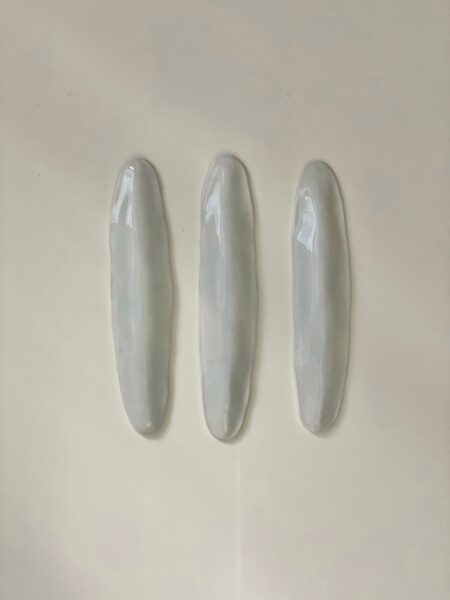 “I love looking at paintings and I love working in clay. That is how my ceramic wall art came about. I use walls as my canvas and, by merging elements of painting and sculpture, my works hopefully draw you in as something new and different and, at the same time, feel strangely familiar. I describe my creations as dimensional paintings or painterly sculptures that evoke nature –though I try not to force forms. Some images are still; others, more dynamic. They are a blend. Having been born and raised in New York in a Japanese household, I myself am a blend of cultures. Art imitating life.”

AOK’s makes her art following time-tested ceramic processes and techniques. Each one-of-a-kind piece is hand-made using rolled out slabs of light-colored earthenware clay. The work is fired in an electric kiln to 1940°F (1060°C) and finished with commercial glazes and kaolin terra sigillata, a very refined liquified clay used by Ancient Romans and Greeks on pottery vessels. AOK also employs a few south of conventional techniques of her own, such as rice packed in stockings used as slump molds to draw water out of the clay evenly.

“I deeply respect the extensive, expansive histories and traditions associated with clay, but I am not bound to them. I gravitate towards abstraction for universal reach and to reduction for clarity. My intent for all works is to encapsulate and emit a sense of life, energy and spirit.”

AOK grew up in New York, raised by her Japanese parents. One of the few Asian Americans in her neighborhood and school, she pursued a higher education in East Asian Languages and Cultures to round out her connection to and understanding of her roots. Through that immersion, AOK ultimately became reconnected to her early impulses towards becoming a ceramicist.

“While receiving a full-on academic education on Japan by Western scholars, deep down, I wanted to make art. I specifically had an urge to work in clay. One summer, an uncle in Japan introduced me to a female potter in Shigaraki. It was rare for a woman to be a potter but she taught me the very traditional basics of Japanese pottery. At the end, we fired a large anagama wood kiln for three days straight, an immersive learning experience. Even more influential was that the fact this artist also happened to be the caretaker of a local doctor who had one of the largest collections of ceramic works by the famous Yagi Kazuo.”

AOK then went on to study ceramics at New York State College of Ceramics at Alfred University, which she describes as a very special institution focused on highly advanced ceramic techniques and engineering.

A Fulbright scholarship allowed AOK to take an extended trip to Japan. There she traveled to experience the local culture and changing seasons. Immersions in workshops allowed AOK to do a deep dive into ancient and contemporary ceramic traditions.

Following her return to New York, AOK went on to complete her master’s degree at City University of New York, Hunter College, where she met husband and fellow artist Zilvinas Kempinas.

For a few years, AOK balanced the all-encompassing roles of artist and mother, sharing that Long Island City studio with her husband. Soon after, however, she put her career on the back burner to be a full-time mother.

“After our second son was born, I chose to focus on raising our boys, while my husband focused on his art and thriving career. Back then I was often asked if I felt like I was ‘sacrificing’ my time. Now I can say my choice was anything but. Clay can be packed away. It can wait. But children do not wait to grow up. The time my sons and I spent together will forever be a part of them and me. In any case, both disciplines – ceramics and mothering – are intensely time sensitive, require focused commitment, attention, and care, and are moldable – but only to a certain extent.”

AOK’s reentry into her art occurred in phases:

“Now I look at the works I’ve made and see a fuller picture of my past, enriched by time spent out of the studio. I see how motherhood is now a part of who I am as an artist, how my cultural identities are at peace. I am better at balancing thoughts of ‘what should I cook for dinner?’ while at the studio, and ‘what glaze combination should I apply to that form?’ while cooking dinner. I have a clarity of intent around my works and more confidence and patience in achieving it.”