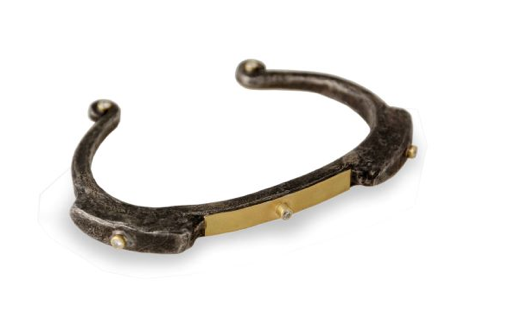 Our primitive collection is a contemporary mix of hand forged, oxidized silver embellished with solid 18k gold details. This bracelet is made of oxidized sterling silver featuring a center bar overlay in 18K gold and a total of 7 bezel set white diamonds.

The bracelet design itself is a replica of an ancient African currency bracelet - just one of a variety of metal objects used in traditional Africa to trade and store wealth. These pieces might be used for major purchases (of land or animals) or to signify a transfer of wealth at major events, such as birth, coming of age, marriage, or death. The most frequent use was as bridewealth, to compensate a family for the loss of a daughter. Most forms were developed from traditional metal objects that were already in use such as weapons, tools, bracelets and anklets.